AK Party’s solution plan for Gezi Park to please all 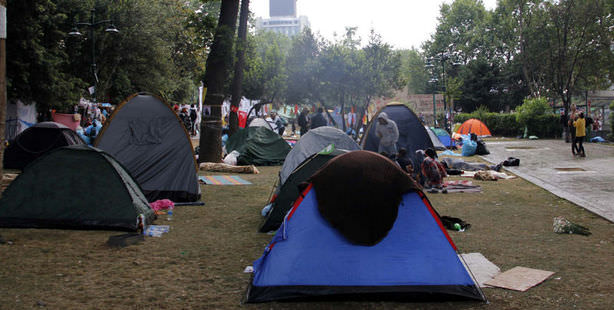 AK Party Spokesman and Deputy Chairman Çelik told reporters after attending a meeting last night between Prime Minister Erdoğan and artists and other representatives of the Gezi Park cause, “There will be no measures taken in regards to Gezi Park until the judicial ruling has been finalized.”

AK Party Spokesman and Deputy Chairman Hüseyin Çelik spoke to reporters from the Prime Ministry following a late-night meeting hosted by Prime Minister Recep Tayyip Erdoğan with a delegation of 16 representatives of the protesters including artists and members of the Taksim Solidarity Platform.

Çelik explained that the meeting, which consisted mainly of artists but also a number of members of the Taksim Solidarity Platform, lasted approximately four hours and provided the opportunity for participants to express their views on the ongoing protests sparked by a redevelopment plan for Taksim's Gezi Park.

Emphasizing that Turkey is a state of law, Çelik stated the following: "It is impossible for the government to go against the law or for the executive branch to perform an unlawful action. There is a court decision that has been made in regards to Gezi Park and of course the government is obliged to respect and conform to judicial rulings."

Çelik explained that there is an appeals process underway regarding the court ruling suspending the planned Artillery Barracks project for Gezi Park and involves a process that is currently being handled by the district administrative court and may continue at the Council of State.

Noting that no measures will be taken in regards to Gezi Park until the judicial process has concluded, Çelik stated, "In the event the ruling is in favor of the endeavor and the decisions made by the government, the issue will still be brought to a public vote by the government in order to establish how the public feels and what they do and do not want in regards to the project." Explaining that in this case, the government will hold a plebiscite involving a public vote to determine the overriding view on the municipal decision, Çelik stated "We consider the decision made by Istanbul residents to be extremely venerable. Even if the judicial ruling is favorable, our government will be holding this vote and is obliged to do so."

Çelik also acknowledged that the delegation expressed their concerns regarding the use of disproportionate force by police and requested an investigation be conducted by the government on police officers who acted arbitrarily and excessively and stated, "The government has shared the same views from the start. An investigation has begun. If it has been determined that they blatantly erred and committed crimes then they will also be subject to penal sanctions."

Reiterating that the Gezi Park will remain as a park until a judicial ruling has been issued and a plebiscite held amongst the public, Çelik said, "However, Gezi Park must no longer be a park where only a certain group stays for 24 hours. I am addressing the youth that are staging a peaceful and democratic protest in order to express their environmental sensitivities that to go home to your warm and comfortable beds at night would be the right thing to do and is what needs to be done. Ultimately, the representatives of the protesters and the artists that we met with also share the same views."