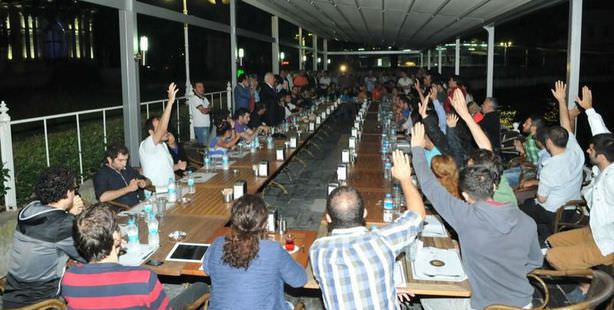 Istanbul Governor Mutlu met with protesters after midnight on Thursday at a café along the Bosphorus.

Throughout the day on Thursday, Istanbul Governor Hüseyin Avni Mutlu released messages on Twitter expressing his desire to meet with demonstrators from Taksim Square, the epicenter of the protests, at a cafe by the Bosphorus waterway to discuss their demands that the government abandon plans to build a replica Ottoman-era barracks on the park, which adjoins Taksim.

"For those who want to talk face to face tonight, from midnight we will talk in groups, if necessary until morning," Mutlu said on his Twitter account. The meetings began at 00:15 last night at the Saat Kule Café in Dolmabahçe and went on for five hours into early morning Friday.

Speaking to reporters as he entered the closed talks, Governor Mutlu expressed that he called on the environmentally aware youth in order to discuss their stance on Gezi Park and their expectations for what will come next. Mutlu also said that he wanted to meet with the activists in order to evaluate the present situation together as well as to tackle issues they have requested be discussed about. Pointing out that he called for these meeting through social media as well as during telephone conversations after he provided his personal phone number to protesters over Twitter, Mutlu said that the meeting would go on for as long as the protesters like and if necessary into the morning. Mentioning his hope that the meeting will be productive, Mutlu also expressed how pleased he was to be meeting face to face with the young activists.

Also present during Governor Mutlu's statement to the press was an activist who remarked on the speculation that there may be an intervention in Gezi Park. Governor Mutlu responded by saying that it was for these reasons also that he wanted to hold this meeting and that everyone should rest assured that they also hope to solve the issue without having to take any intervening measures.

Governor Mutlu explained that although the press would not be allowed to attend the meeting, if desired they could speak with activists upon their exit. Once Mutlu entered the café, protesters were seen flocking to the region.

When the long-winded meeting concluded and after listening to their demands that the government abandon plans to build a replica Ottoman-era barracks on the park at Taksim, Mutlu said he sensed flexibility among the protesters. "We felt they showed sensitivity...and did not have an unyielding stance regarding staying there (in the park)," Mutlu told reporters.