“We will return the EP ruling right back to them” 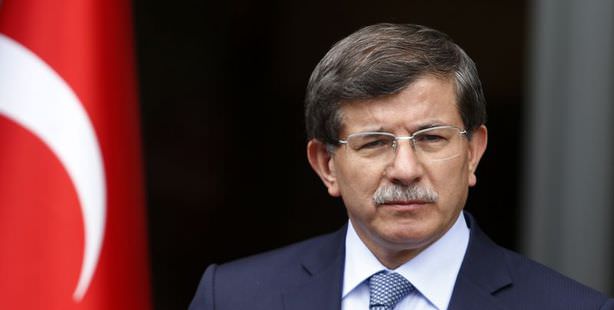 Foreign Minister Davutoğlu says the European Parliament resolution adopted on Thursday is unacceptable and should they notify Turkey of the resolution, then Turkey will instantly return the gesture.

Foreign Minister Ahmet Davutoğlu spoke to reporters on Thursday regarding a resolution adopted by the European Parliament (EP) asking the government to stop using excessive force to disperse protesters, an allegation which Davutoğlu said Ankara categorically rejected. Davutoğlu stated that if they attempt to notify Ankara of this resolution, then Turkey will immediately send it right back.

The European Parliament on Thursday warned the government against the use of "harsh measures" against peaceful protestors and urged Erdoğan to take a "unifying and conciliatory" stance.

In a resolution adopted in Strasbourg, the European Parliament expressed its deep concern "at the disproportionate and excessive use of force by Turkish police to break up peaceful and legitimate protests in Istanbul's Gezi Park". The comments were not welcomed by Ankara and Foreign Minister Davutoğlu held a press meeting at the Foreign Ministry in Ankara in order to relay his discontent with the ruling as well as the portrayal of the protests in Turkey abroad.

Davutoğlu said that first and foremost this ruling was unacceptable in terms of procedure, style and substance, because the EP has refrained from reacting in the same manner to recent demonstrations and police crackdown in a number of European capitals.

Pointing out that Turkey is a first-class democracy and one that has always advocated universal values such as freedom of expression and to demonstrate, Davutoğlu stated, "When we look back over past years, we are able to observe that from a procedural standpoint the European Parliament has not adopted similar resolutions especially when it comes to demonstrations that have been staged in reaction to the economic crisis. Therefore, we find it unacceptable that when it comes to Turkey, the European Parliament has chosen to adopt such a stance."

Foreign Minister Davutoğlu went on to note that the resolution is also unacceptable in terms of its style and stated, "Using a tone of superiority, this resolution has adopted a manner of not differentiating between the sincere protesters that are exercising their right of expression and demonstration and the marginal groups that have resorted to violence. Turkey is not a nation that needs to be taught a lesson in any way on these topics by any country or by any group of countries."

Foreign Minister Davutoğlu also mentioned that the international media has taken on an 'orientalist' stance recently, which he said the EP has only reaffirmed with this resolution.

Noting that the balance between freedom and order established by democracies should be observed by everyone, Davutoğlu said, "The Republic of Turkey has always adopted these basic principles and will continue to do so. If there is any error in practice then the state of law will take whatever action deemed necessary." The Foreign minister also pointed out that Prime Minister Erdoğan has mentioned in statements that any errors in practice will be investigated and said that this process has already begun. Within the principles of a state of law, Turkey will continue to protect the freedom to demonstrate and its stance of allowing everybody to exercise their right of openly expressing their concerns. However, we will not allow anyone to create a chaotic environment in this nation nor will we permit any attempts to try to create such an appearance or image of chaos."

Davutoğlu went on to recall similar protest which surfaced in Frankfurt, Germany on June 1st, in which police were also forced to use tear gas and water cannon to disperse crowds, and stated, "On the very same day in which we withdrew our police forces from Taksim Square, similar methods were used to contain a protest in Frankfurt. Upon closer inspection of this announcement, it is evident that it is intending to portray the image that disproportionate efforts and even violent measures were used against non-violent protesters. Turkey and our government will always protect liberties. We will continue to exercise the laws of free demonstration within a state of law. It is in this respect, that we draw a distinct line between the youth and civil society organization representatives that are in Taksim's Gezi Park and the marginal groups that are trying to exploit the situation."

It will be sent right back…

Foreign Minister Davutoğlu also commented on the recent attempts in the international media and through certain statements released to tarnish Turkey's rising profile in what he called was an operation on the nation's image. Clarifying once again that they will not allow for this, Davutoğlu reiterated that they found the EP ruling to be unacceptable and said that if they are notified of the resolution, Turkey's permanent EU representation will be sending it right back.

The term 'we are concerned' is discomforting...

In response to a question regarding whether there was any tension between Turkey and the United States as a result of recent developments, Davutoğlu stated that there was no tension experienced and that he is and will remain in contact with his U.S. and EU counterparts. The foreign minister did state however that they were uncomfortable by the use U.S. using the term, "We are concerned with the developments in Turkey." Criticizing the fact that the term 'concern' has not been used for other countries when similar developments have occurred, Davutoğlu stated, Turkey's democracy is just as mature as the democracy in France, England and Germany and has its own mechanisms to solve internal problems."