A four-item road map to solve the Gezi Park crisis 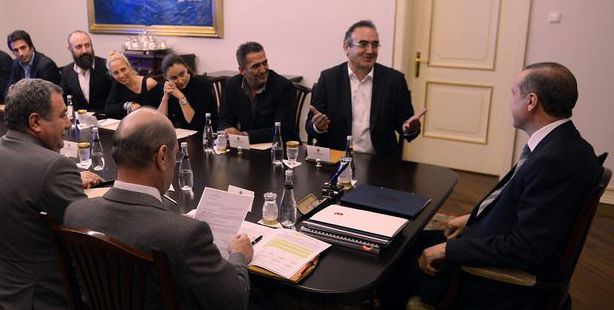 After deliberations between Prime Minister Erdoğan and other government officials with a delegation representing the Gezi Park protesters which went on into the morning hours of Friday, a decision was reached to respect judicial rulings and citizens’ opinions. Bringing the Gezi Park protests to a close with a series of artistic events is also now on the agenda.

The series of meetings hosted by Prime Minister Recep Tayyip Erdoğan within the framework of establishing dialogue to reach a solution to the Gezi Park protests has resulted in determining a 'roadmap' geared towards bring a peaceful end to the demonstrations.

Prime Minister Erdoğan hosted a delegation of eight artists and eight representatives from the Taksim Solidarity Platform on Thursday night for a meeting that ran into the early morning hours of Friday. According to the information obtained, the delegation was pleased with Erdoğan's stance as well as the outcome of the meeting, which is slated to have resulted in a consensus on a four-condition roadmap that will work towards putting an end to the demonstrations as soon as possible.

This four-item road map, which is based on the conditions of respecting the judiciary and public opinion, is as follows:

1- Judicial rulings will be respected in full. If the judiciary issues a definitive ruling on cancelling the barracks project, then Gezi Park will remain as a park.

2- Turkey's democracy will be trusted in and if the judiciary reaches a ruling in favor of building the Ottoman-replica project in Taksim Square, then the public will be asked to participate in a plebiscite to establish a public vote which will ultimately determine whether or not the Gezi Park will be turned into the Topçu Barracks.

3- A thorough and transparent state investigation will be held into the use of violence and disproportionate force by police, which is considered to be the greatest factor leading to the escalation of events.

4- Gezi protesters will be relayed and asked to follow the conditions agreed upon, which include the continuation of dialogue, preventing provocation and putting an end to the occupation of Gezi Park in order to preserve Turkey's esteem.

The delegation that met with Prime Minister Erdoğan is said to have walked away pleased with his stance and understanding of the situation and as a result they have embraced the option of putting an end to the protests with a series of artistic events to be held over the weekend.

The first to relay information regarding the meeting with Prime Minister Erdoğan was Taksim Solidarity Platform TMMOB City Planning Chamber Istanbul Department Chairman Tayfun Kahraman who said, "Unfortunately, there have been four deaths during this duration. We still feel this pain in our hearts. Tomorrow's events will not be festive; it will be like a memorial, a mourning to remember them by. We are expecting everyone to show up."

Writer Sunay Akın stated, "What my heart desires is for us to go from here to Istanbul and to join our friends in Gezi Park and with our art, poetry, songs and documentaries, crown this event with a democratic finale. There is a legal process that is already underway."