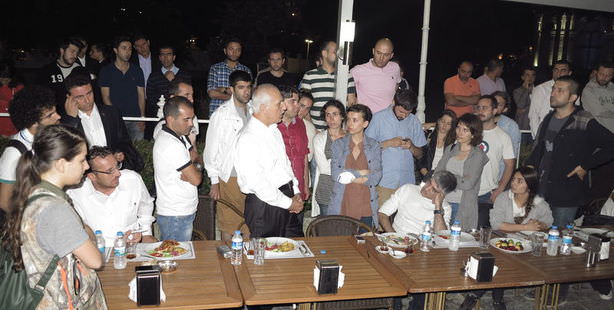 Istanbul Governor Mutlu held discussions with protesters which started late Thursday night and went on into the early morning hours of Friday. There was no lapse in respect during the talks that were both peaceful and spirited. The main questioned asked was who ordered the use of disproportionate force.

Istanbul Governor Hüseyin Avni Mutlu met with nearly 150 protesters at a café in Dolmabahçe for a five hour discussion which started just after midnight on Thursday and concluded at 05:15 Friday morning. It is an arduous task to derive clear observations from a discussion of his lengthy nature, however the main theme was one of love and tolerance. Governor Mutlu addressed participants as a state official, a father and as a former law school student in Istanbul and spoke at a dose that managed to create a collective sentiment. Participants quickly sensed the governor's 'base emotion' of peaceful, appeasing, restorative and conciliatory intent. Even the most harsh, egregious questions were posed without, as an idiom of ours says, 'failing to show respect.'

The most frequently asked questions by the Gezi Park protesters were the following:

- Who gave the order to set the tents on fire?

- Who gave the orders for police to enter the courthouse and forcefully remove attorneys?

- How is it that as you tweeted about 'birds, butterflies and bees,' the second biggest police raid was taking place?

- What measures will be taken for police officers who covered up their helmet numbers?

Governor Mutlu responded to these queries by stating, "I can sense that some of the responses I have given have not completely satisfied you. There are certain situations that have already entered a judicial process and investigations have begun."

One participant stated, "It is obvious you are a good person and have been saddened by these events. If only you would resign, then you would become a folk hero." Governor Mutlu wittily responded by stating, "I thought you were against gas. Guys, now you're trying to get me to step on the gas," which evoked laughter.

As the meeting concluded in the early morning hours, Governor Mutlu stated, "In expressing your positions and your analysis you always referred to the prime minister as "our prime minister." I would like to express how valuable I find this. We need to ensure they feel that we understand them."

This is a translation of an article originally written by Savaş Ay.