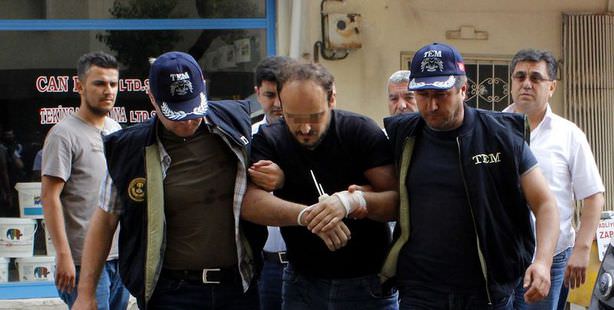 The number one suspect accused of planning and staging the twin bombings in the Hatay town of Reyhanlı, which killed 52 people, Nasır Eskiocak as well as three other perpetrators were arrested on Friday.

Nasır Eskiocak, the main perpetrator responsible for planning and staging the twin bombings in the border town of Reyhanlı, Hatay, as well as three other suspects were put under arrest yesterday. One suspect was later released by the prosecution.

As a widespread search ensued for the main perpetrator of the May, 11 bombings which resulted in 52 deaths, on June 11th, security forces detained Nasır Eskiocak, who is considered to the individual who planned the attacks, as he was attempted to cross the border into Syria from the Güveççi village located in Hatay's Yayladağı district. The four individuals accompanying him were also detained. After undergoing questioning in the Hatay Police Department, yesterday morning, the suspects were brought to the Adana Courthouse.

Eskiocak, who testified to a Special Authority Public Prosecutor, appeared to have a number of injuries as both his hand and leg were bandaged and he had wounds and bruises in other places on his body. While one of the suspects who testified was released by the prosecutor, Eskiocak and the other three suspects were arrested by the court on duty.

This is a translation of an article originally written by Nazan Erdem.