There is a functioning democracy in all of Turkey’s institutions 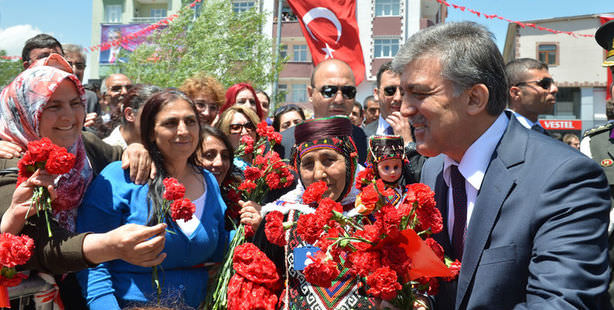 On the first presidential visit to Ardahan in 18 years, President Gül had the chance to comment on the European Parliament’s resolution vote on Thursday by stating, “When reacting they need to have enough information to realize what is what.”

On Friday, President Abdullah Gül became the first president to pay a visit to the Northeastern province of Ardahan in 18 years. President Gül was accompanied by ten horsemen upon his entrance to the Rahvan Equestrian Sports Club, where he greeted the public awaiting his arrival and was gifted flowers by children in the crowd.

Responding to reporters' questions regarding Gezi Park, President Gül explained that the situation in Turkey has begun to resume its normal course. Underlining that they are trying to solve the situation through dialogue, President Gül stated, "At this point, I suggest everyone remain calm and level-headed. All of our merchants, workers, students and everyone needs to now return to their normal line of duty and no one needs to be harmed any further."

'THERE IS A FUNCTIONING DEMOCRACY'

Turkish President Gül also commented on the European Parliament (EP) resolution accepted on Thursday in regards to the Taksim Gezi Park protests. When reporters reminded him that the European Parliament criticized the government's stance in regards to the protests, yet there seemed to be statements made praising his and Bülent Arınç's position Gül stated, "The EP is probably aware the Turkey is in negotiations with the EU. They are negotiating with us because there is a functioning democracy in Turkey. When the EP reacts, they should be well aware of what is what. The protests in Turkey are similar to those held in Madrid, Athens and London."

THE EU IS PLEASED

Peter Stano, Spokesman for European Commissioner for Enlargement Stefan Füle released a statement on Friday which stated that Prime Minister Erdoğan's meeting with representatives of the protesters was both a positive and constructive development.

This is a translation of an article originally written by Sinan Aydın.