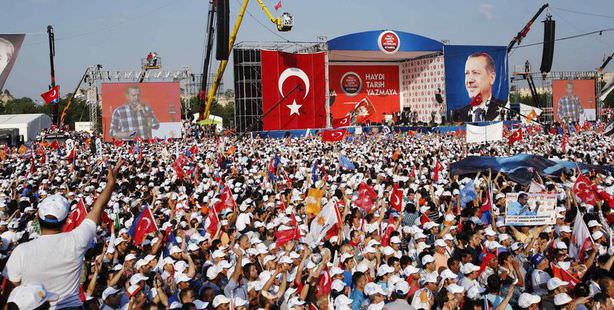 Nearly a million Istanbul residents flocked out to see Prime Minister Erdoğan speak at an AK Party rally in Kazlıçeşme on Sunday. Istanbul residents want the vandalism of protesters destroying and setting the city on fire to come to an end as soon as possible. Meanwhile, they also support Erdoğan’s referendum proposal.

Prime Minister Recep Tayyip Erdoğan addressed the Gezi Park protesters during the second, "Respect for the National Will" meeting for the ruling Justice and Development Party (AK Party) held in Istanbul's Kazlıçeşme Square on Sunday.

Referring to the ongoing protests, Erdoğan emphasized that the issue was not just an environmental issue centered on Gezi Park and stated, "Turkey is the target. My brothers who are taking place in the demonstrations need to now be aware of this game. Turkey is not the type of country you can operate on through social media."

The following are a series of messages delivered by Prime Minister Erdoğan at the AK Party's Kazlıçeşme rally:

PM LASHES OUT AT CNN AND BBC

* "If there is anyone who wants to see the true picture of Turkey despite the international media, then it is right here. Come on BBC, CNN and Reuters, try to hide this too. You have been producing falsified news reports for days now. This nation is not the one you introduced to the world. This nation is not one that bangs pots and pans at night.

* Right now Gezi Park and Taksim Square have been evacuated. The municipality is cleaning up Gezi Park and will be planting flowers. The true environmentalists are now at work.

* I am warning. They have begun to call on people to return to Taksim Square. Please, do not rise to the bait. The issue is not Gezi Park… First they attacked my party's general headquarters with flame throwers. Then they martyred 53 of my brothers in Reyhanlı. These recent events are the final ring on the chain. Democracy and national will… the target is Turkey. I would like my brothers who are taking part in these demonstrations to see this game for what it is.

* Friends and foe need to understand this. Turkey does not consist solely of Taksim Square, Kuğulu Park and Alsancak. Turkey is Kasımpaşa, Fatih, Erzurum and Trabzon. In March 2014, you will be exploding those poll booths. Nobody's games will unravel us, no one's traps will work on us and not even somebody's ugly scenario will touch us. Turkey is not the type of country you can operate on through social media."

THE EP SHOULD KNOW ITS PLACE

* "The European Parliament (EP) has made a ruling. Know your place. Are you authorized to issue rulings when it comes to Turkey? Turkey is not an EU member right now, we are in negotiations. Certain media institutions were establishing governments of their liking in this country. They were all revealed like litmus paper. The interest-rate lobby has surfaced well. We know who sent out provisions and who let people stay in their hotels. If we don't pursue it, then our nation will hold us accountable.

* What did those who came to speak with us say? We should be able to hold a meeting wherever we want. I told them this isn't a country you can just do whatever you want in.

* I am calling on the neo-nationalists: To CHP and its partisans. How could you allow a flag depicting the head of the terrorist organization to wave next to Atatürk and the Turkish flag?

* They come and try to tell us from Europe that this is freedom. This park does not belong to those occupying forces nor does it belong to the youth that flocked out with sincere intentions. 'We set up tents here…' Well my brother you can't. The places where you can set up tents are obvious. There are many camping grounds, go and camp out there. This (Gezi Park) is not your property.

* If you want to bring down the government, then the way to do so is obvious. There are elections in 2015. If you put your efforts into the elections and are able to bring us down, then do so. Why are you not taking this route and instead embarking on senseless numbers?

* There may have been mistakes and errors made. However, last night in Ankara, a CHP deputy fell to the ground in what was a show. Deputies cannot allow for terrorism. They have led the way for those who want to terrorize. One of the CHP deputies that was in the Divan Hotel, insulted my governor. This is their disposition.

* If the police have erred, we will investigate the matter. However, we will also be investigating those who exerted violence against police, those who engaged in conflict on the streets and damaged public property as well as those who staged provocation via social media.

* We will uncover the situation and will definitely be holding people accountable. Our police, judiciary and democracy have been given a very difficult test. However, Thank God, we have successfully passed this test."

One million, two-hundred thousand citizens came out to watch Erdoğan's address at the AK Party rally on Sunday in Istanbul. Citizens waved flags, including Azerbaijani, Palestinian and even Macedonian flags amongst the throngs of AK Party and Turkey flags. Creative slogans such as, "You couldn't bring us down with a sledgehammer, so you will never bring us down with pots and pans," were chanted by the crowd in support of the AK Party government. A thousand boats, including fishing boats, were used to transport citizens by sea to the parade square where the meeting took place. Thirty ambulances were parked waiting outside throughout the meeting. Perhaps the most interesting sight was that of members in the crowds donning masks of Erdoğan's face in a show of support.

This is a translation of an article originally written by Hasany Ay, Demiz Derim, Recai Kömür, İlhami Yıldırım and Murat Şengül.