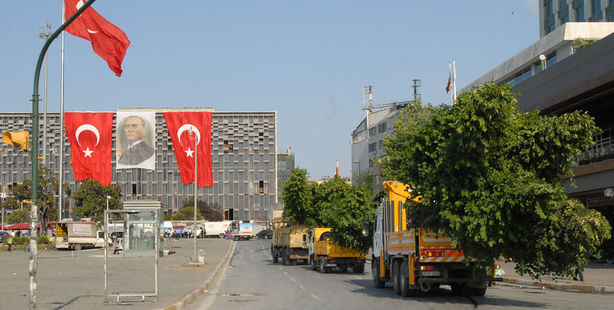 The Istanbul Metropolitan Municipality has been working continuously since last night on clearing and landscaping Taksim Square and Gezi Park.

A team of 1,000 working for the Istanbul Metropolitan Municipality is still working on cleaning and planting trees and flowers in Taksim Square and Gezi Park since starting last night.

In addition to cleaning the area, the Park, Gardens and Green Area Department has been replanting the green areas that were ruined in the protests. The first stage of the planned works involves planting 20 mature trees in Taksim as well as 152,000 flowers around the Republic Monument in Taksim Square. Part of the planned work involves the renewal of all bus stops, signs, traffic lights, direction signs, billboards, traffic cameras and sidewalks that were destroyed in demonstrations. An announcement released by the Istanbul Metropolitan Municipality states that the maintenance work is planned to be completed soon.

While addressing one million supporters at the AK Party meeting in Kazlıçeşme yesterday, Prime Minister Recep Tayyip Erdoğan explained plans to clear the Taksim area by stating, "We met with a group of representatives of the protesters and I told them that we will follow the court ruling and even if it is in favor, we will hold a referendum to hear what the public says. Most of the participants agreed and I told them to tell the protesters to evacuate Gezi Park, because that park is for everyone." Explaining that he warned that if they didn't leave on their own, they would be forced to evacuate the park themselves, Erdoğan said, "The Gezi Park is now empty and Taksim Square is empty. Our municipality has now cleaned the area and will be planting flowers. Environmentalists at work… And who are these environmentalists… the AK Party."