President Gül: The Gezi Park project is on hold, the protests should stop 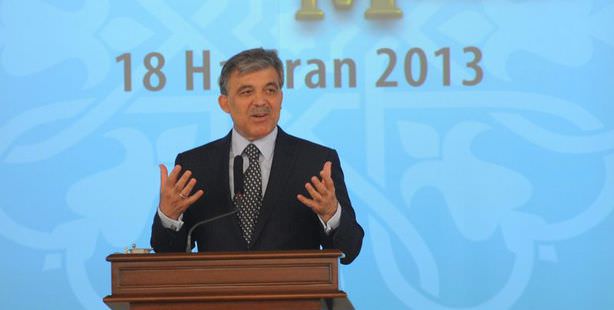 “The messages have been received,” stated President Gül, who also called for an end to the street demonstrations. The president also delivered a message to Alevi citizens who are objecting to the name given to the Third Bosporus Bridge by stating, “We could name another big project after Pir Sultan Abdal.”

President Abdullah Gül commented on the Taksim Gezi Park protests by stating, "The project has been put on hold. We have all been rattled. It's now time the street demonstrations come to an end."

Speaking at a reception held following a promotion for the "Great Seljuk Legacy Project", President Gül remarked on the Gezi Park protests, new regulations on social media, relations with the EU and also addressed the unease felt by Alevi citizens with the name selected for the third bridge to be built in Istanbul.

The following are a series of messages delivered by Gül during his address:

* What was important in regards to the park was to hear out the objections made in the beginning. From here on out, the situation needs to ease off. It was important to establish dialogue. You also saw the comprehensive efforts made, meetings were held and people were heard out. At this point, the projects have been put on hold. It appears the messages have been heard.

* I believe that the demonstrations on the street must absolutely come to an end. No one realizes as it is happening, but I have been communicating with the business world. There have been significant concerns developing abroad. Beyond that, the demonstrations at night, these sorts of things need to come to an end now. In the end, people will begin to lose their sense of peace. No one may be aware; however this has all harmed the economy.

* As Turkey, these events have all rattled us. We all have lessons to learn from this. We now need to collect ourselves. Otherwise, we will only begin harming ourselves. It isn't easy. You can spend ten years trying to create a certain image however it can be destroyed in a week. The international press may portray events inaccurately. This cannot be compared to what happened in the Middle East. Just look at Baghdad and how they are perceived internationally. That is a place that is in conflict daily. We need to ensure we do not give off this image. We must not serve any injustice to Turkey. There may be areas we are lacking; however this can all be fixed.

* You can close off Fifth Avenue in New York, but jut for an hour. In the same manner, you cannot close off De Gaulle Square in France for longer than an hour, there is no way that any longer amount of time would be allowed. However, if someone sets up a tent in front of the White House in Washington D.C. saying they are against nuclear weapons, well then there will be a policeman standing over them.

* (On social media) On this issue we need to make sure we do not regress beyond EU regulations. If there are excessively incorrect messages being shared on social media and if there is provocation well then that shouldn't be allowed. It shouldn't take place there, just like how it has no place in a newspaper.

* In evaluations of Turkey, we critique the excessive use of force; however, we must make sure that we also do not excessively critique Turkey. Beyond that everyone is able to critique one another. The European Parliament should also not be excessive in their critique of Turkey.

* I am aware that the naming of the third bridge has become a sensitive issue to some. We may end up naming a big state project Hacı Bektaş-ı Veli or Pir Sultan Abdal.