Istanbul Mayor says residents will now be consulted on all public projects, even bus stops 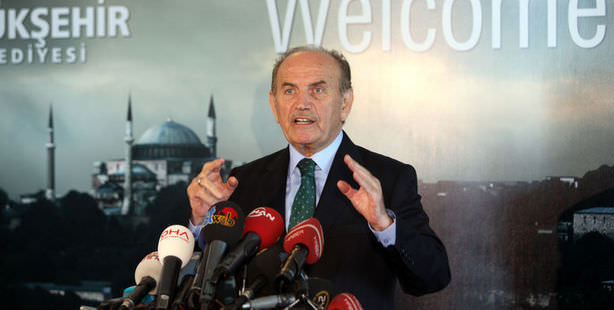 Istanbul Mayor Topbaş announced on Thursday that the municipal employees who set tents on fire in Gezi Park have been suspended and stated that from here on out, when it comes to Metropolitan Municipality projects, the public will be consulted with.

Releasing a series of statements following a coordination meeting with his staff, Istanbul Metropolitan Municipality Mayor Kadir Topbaş placed emphasis on the fact that from here on out, the public will be well-informed on all metropolitan projects. "Even if the location of a bus stop is planned to be changed, those who use that stop will be consulted." The Mayor of Istanbul also announced that legal procedures have already begun on the seven municipal employees who burnt tents belonging to protesters in Gezi Park and stated that the protests which began with good intentions escalated to new proportions, and was reflected in both Turkey and all over the world in a distressful manner.

Istanbul Mayor Topbaş went on to state the following on the Gezi Park protests:

"It is not possible for us to say anything against those who are sincere in their sentiments and protesting and to those who express their own opinions. However, we also see that in lieu of a civilized protest, demonstrations took place that resulted in significant damage throughout the city. We are working nonstop on regaining all that Istanbul has lost.

* I spoke with approximately 300 artists, civil society representatives and opinion leaders that participated in the Gezi Park protests. Ninety-nine percent of these people stated that they began protesting as a result of messages on social media that inferred that all of the trees in Gezi Park were being torn down and the building of the Topçu Barracks had begun. There are certain groups we feel may be uncomfortable with the developments in Istanbul and Turkey.

* From here on out, we will be further informing the public before conducting planned projects. All projects will first be shared wth the public. The public will be informed. We will be consulting with the public to hear their views. Even if so much as the location of a bus stop is to be changed, the residents who use the stop will be consulted with on the matter.

* Seven municipality employees have been identified in connection to the burning of tents in Gezi Park. Four of these individuals happen to be public servants, while three were hired through a subcontractor. While the public servants have been suspended, the business agreement with the other subcontracted workers has been cancelled.

The order to tear down tents was not issued by the municipality. The details will all be revealed eventually. An administration would not just go and say burn down these people's tents. We have released a motion with the Chief Public Prosecutor and the Governorship on returning the tents.

This is a translation of an article originally written by Zeynel Yaman.