“They have stirred up the country" 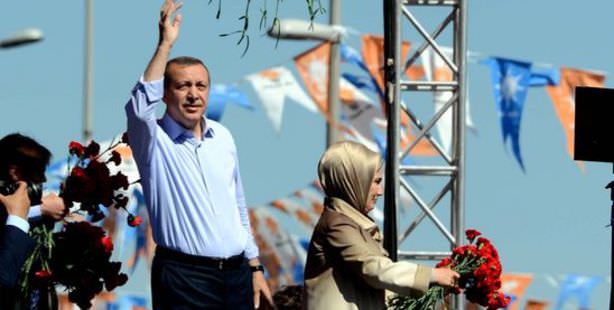 Addressing the ‘standing man’ demonstrators, Prime Minister Erdoğan told the crowds at an AK Party rally in Kayseri, "Their greatest dream is for Turkey to become a country that makes no headway. Their intentions are geared towards sabotage. We will not succumb and we will put an end to this game.”

Prime Minister Erdoğan referenced the "standing man" demonstrations by stating, "Their greatest dream is for Turkey to be at a standstill, to become a country that makes no headway," and went on to deliver the following messages:

* "I do believe that the CHP members who are bothered by the vandalism, MHP members who are uncomfortable with the barbarism, BDP, BBP and Saadet members who are against fascism, are with us. They say the prime minister does not hear out the youth. If they are the youth, then aren't the people here also our youth?

* There are some amongst them who are uncomfortable with us holding these meetings. Fine, but are we supposed to not hold meetings and then just watch as you burn and destroy public buildings and vehicles? If you are also sincere, then come and let's hold these meetings within the bounds of law. At present, damages have surpassed 200 million TL. Hey leftists, I am calling on you CHP. You have gone and gotten illegal organizations stuck on your trail only to stir up the country like a blender.

THEY HAVE OTHER CONCERNS

* These meetings are not against impropriety, union rights or income raises. They are stuck on Gezi Park. They have other concerns. The voice, authority and decisions belong to the nation. There is no trap, no game and no scenario that could ever change that. The international media, illegal organizations and vandals can do whatever they like, Turkey will not rise to the bait.

* We say 'Don't stop, let's continue on.' What do they say? 'Standing man.' For years now they have said the contrary that just standing was not befitting of Turkey,' however all they did was stand and they are still just standing. The best thing they have done all of their lives is to stand and stop others. They have been quite successful at it. Their biggest dream is for all of Turkey to become a 'standing man.' They want Turkey to be a country that makes no headway. However those who were unable to make the nation standstill have now become a 'standing man' themselves. We are not going to just stand; we will continue marching with assured steps to 2023.

* This game is both interior and exterior. There hasn't been news of a death due to terrorism in months. Hopefully, this issue of terrorism which has been ongoing now for 30 years and has killed 40,000, will now be coming to an end. This makes them really uncomfortable. They are aiming to disrupt the resolution process by inciting these recent events. We will not succomb, and we will put an end to this game.

* We will hopefully be holding our final meeting with the 'Wise Persons Committee' this Wednesday and will hear their reports. We will be continuing this resolution process with determination. We will ensure Turkey grows through elevating our brotherhood.

* For awhile now there have been attempts to draw our Alevi brothers into a game by using extremely distasteful methods of provocation. CHP plays a big role in these games. Certain deputies have taken on starring roles. I am addressing my Alevi brothers in all sincerity to please beware of these traps. * When issuing an apology for the Dersim events, the chairman of CHP stood directly against me. Meanwhile, he supposedly says he is from Dersim. We have sincerely bowed down to address the issues suffered by my Alevi brothers. My Labor and Social Security Minister is now reestablishing efforts and hopefully, we will be taking wonderful steps together. We will not allow anyone to get hurt. We are the government of 100 percent of the 76 million in this country. Hacı Bektaşı Veli and Pir Sultan Abdal are the merit of 76 million. We will surpass all of these issues together.


This is a translation of an article originally written by Mehmet Ali Berber and Ufuk Emin Köroğlu.