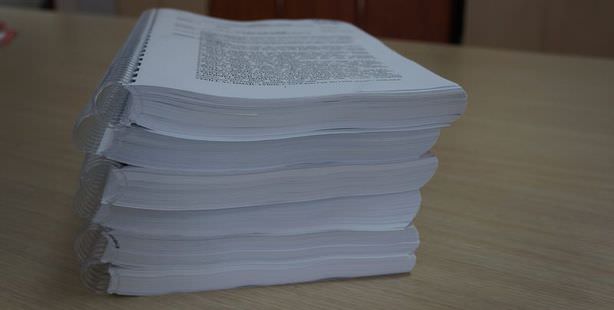 As part of the Feb.28 indictment, the Financial Crimes Investigation Board is now looking into individuals who acquired significant capital during the 1997 Military Memorandum, which is also referred to as the postmodern coup.

The economy suffered a 300 billion dollar hit during the era in 1997, which began with a military memorandum issued on February 28 and as a result the investigation is now expanding to include a closer inspection of prospering businessmen and journalists at that time.

The Ankara Chief Public Prosecutor has now begun examining the assets of civilians in addition to military members at the time of the February 28th post-modern coup. On February 28, 1997 the military-dominated National Security Council issued a stern warning to Prime Minister Necmettin Erbakan, accusing his government of policies undermining the secular constitution. Commentators dubbed the episode Turkey's "post-modern coup" as the generals used pressure behind the scenes to force Erbakan to resign four months later.

The Financial Crimes Investigation Board (MASAK) is basing the investigation on the 1,300-page February 28 indictment, which has reaped a number of intriguing details. The bank accounts and property deeds belonging to certain businessmen as well as chamber and union presidents are now being closely scrutinized in an investigation into their assets at that time. A number of Supreme Education Board (YÖK) employees have also made the list of individuals that are now being investigated.

A CLOSER LOOK AT WOMEN AND CHILDREN

MASAK is now working on preparing a list of individuals who experienced noteworthy asset accrual during that time, which they will then submit to the prosecution in two months' time. As the board prepares to embark on this thorough investigation, they are also now examining the spouses and children of the individuals who have made the list. The initial inspection is focusing on tracking any correlation between high-stake financial exits and the transactions in said individuals' bank accounts. All assets registered to the individual in question, including cars, real estate, companies and land will be entered into a comprehensive inventory.

According to findings detailed in the Parliamentary Sub-Commission report on February 28, the post-modern coup resulted in an economic downfall of 300 billion dollars. As part of the investigation, the increase in assets of those who supported the process is now being inspected one by one. Commenting on the investigation, a high-level authority has stated that once completed the investigation, "will reveal one by one who made a fortune as a result of the coup." The official also explained that they aim to complete the inspection within three months and explained that the 300 billion dollar loss recorded in the commission report will be revealed in all of its details and in plain sight. "You can see the individuals who used to be renters were all of a sudden living n villas. There are a number of leads in the indictment prepared by the prosecution. The Parliamentary Feb. 28 Commission report also worked as a guide. We are not only looking into private institutions, and certain public establishments, but we are also scrutinizing the finances of bureaucrats at that time. This is quite a detailed effort. We have requested information from a number of institutions and therefore it may take three months for us to complete the investigation," stated the official.