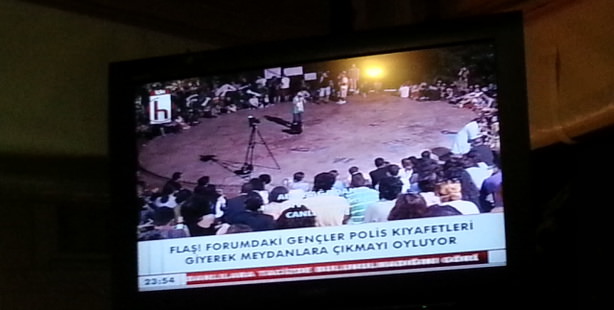 Halk TV, a television station that has been providing non-stop coverage of the Gezi Park protests and has been the recipient of significant reactions due to its biased reporting has now crossed the line once again.

Television station Halk TV has been the subject of public outcry by providing biased non-stop coverage of the Gezi Park protests. The latest move by the television station was to open their broadcast to the provocation of thousands of young demonstrators which have been throwing stones and setting vehicles on fire.

As Halk TV provided live coverage of a forum which took place in Beşiktaş's Abbasağa Park, the television station not only relayed a proposal by a forum participant who suggested that the young demonstrators wear police uniforms when they go out to demonstrate, but also wrote out the proposal in a live banner-display on-screen.

The channel, known for its close affiliation with the main opposition Republican People's Party has been faced with a significant number of penalizations by Turkey's Supreme Board of Radio and Television (RTÜK). The harshest reaction was garnered against the channel when the station broadcasted a penguin documentary during Prime Minister Recep Tayyip Erdoğan's address, when he returned to Turkey from a trip to North Africa at the height of the protests.