The protests’ “Turkish icon” is actually an American 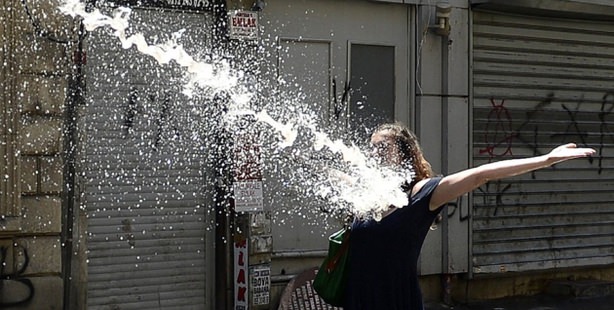 It has come to light that the iconic “Modern Turkish Woman” whose image has been spread spirally by advocates of the protests since the second day of the Gezi Park protests is in actuality an international resident and not even a Turkish citizen.

The images that portray a young woman standing in front of a riot control vehicle while being sprayed, and later dancing in front of it with a friend have been in circulation on social media sites ever since the first few days of the Taksim Gezi Park protests. Widely depicted as a brave Turkish woman in both social media and news agencies alike, the identity of the individual who spread her arms out as water cannon is released is alleged to be U.S. citizen Kate Cullen.

On her Facebook website, Cullen states that she is employed at the Sidney University of Technology. Cullen also alleged on June 5th that chemical weapons were used in Taksim, and asks for the aid of chemists to determine what kind. Cullen also states that she was helped by a woman whom she does not know the name of, and expresses her heartfelt gratitude.

Kate Cullen clearly depicts her views of the Gezi Park protests which can clearly be seen through photos of the park and other related photos she posted on her Facebook page. The most attention-catching of the photos she has posted is one which hailed from Isfahan in Iran.

Here is what she shared on her Facebook page;

"Clear evidence of police using chemical warfare in Taksim. I'm not sure what chemicals were being used (any chemists out there have an idea?) but the pain was so intense I was sure I would go blind and have permanent scaring. If it wasn't for an incredible woman who treated me (whose name I never got, and who I will probably never see again or ever be able to thank), I might well have. Thank you from the bottom of my heart anonymous woman!!! You are the embodiment of the solidarity shown by everybody in this protest!"