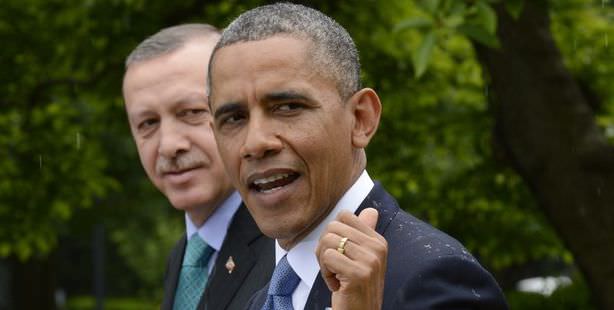 U.S. President Obama called Prime Minister Erdoğan over the phone on Monday to discuss the situation in Syria as well as the Gezi Park protests.

At approximately 17:00 local time on Monday, U.S. President Obama called Prime Minister Erdoğan to discuss the situation in Syria, the Geneva meeting as well as the Gezi Park protests.

Following the telephone conversation, the Prime Ministry released an announcement stating: "The two leaders discussed Turkey and the United States working in collaboration to reach a political solution to the situation in Syria, as a result of signs the Assad regime is using chemical weapons against its own people and expressed a commitment to continue to provide support to the Syria Coalition and the Supreme Military Council as well as expressed the importance of maintaining close cooperation and coordination on counterterrorism efforts."

According to the information obtained, during the conversation the issue of the U.S. releasing disconcerting messages in light of the Gezi Park protests was also discussed. The Prime Ministry announcement also expressed that Prime Minister Erdoğan relayed information regarding the developments and stated, "During the discussion, the two leaders also emphasized that the importance of freedom of the press and expression as well as the rights to nonviolent assembly and demonstrations are amongst the two nations' shared values."

'WE ARE EXPECTING A POSITIVE RESOLUTION'

Deputy Prime Minister Bülent Arınç spoke to reporters following Monday's Council of Ministers meeting during which he expressed their expectations of a positive resolution in regards to the opening of the 22nd chapter in Turkey's EU negotiations process.

In response to a question from reporters regarding the court ruling to release the police officer responsible for the death of Ethem Sarısülük in Ankara being released pending trial, Arınç expressed that the courts may have seen the case as being one of 'self-defense'. "The police officer has not been acquitted and the judicial process continues," stated Arınç.

Mentioning that efforts on legal regulations regarding democratization are now complete, Arınç also shared the good news that there will be a drop in the cost of military service in foreign exchange to be announced within a week to ten days.