“We will never allow security matters to avert freedoms” 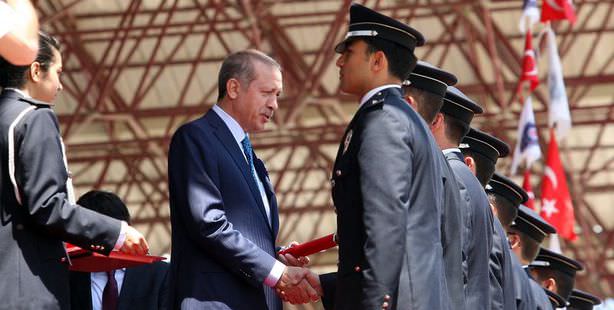 Turkish Prime Minister Erdoğan said on Monday that Turkey would never return to those days when security matters averted freedoms and democracy in Turkey.

Speaking at the graduation ceremony of the Turkish National Police Academy in Ankara, Prime Minister Recep Tayyip Erdoğan stated, "No sabotage and no provocation can turn Turkey back to those days when security based policies dominated the country."

Prime Minister Erdoğan attended a ceremony in the capital for the Ankara Police Academy's 68th class of graduates. A total 475 candidates received their diplomas on Monday, marking their successful graduation from the academy. Amongst the graduates were an additional 62 students that hailed from 15 different countries. The Prime Minister presented the top ten graduates of the academy with a special gift to congratulate them on their success.

During an address at the Police Academy Graduation Ceremony, Prime Minister Erdoğan expressed support for the Turkish police's handling of the Taksim Gezi Park protests and incidents, and said, "We will not let any opponent of Turkey, neither the international nor national media, wear away at our police. No one has the right to insult Turkish police. They have been quite tolerant to the protests since the very beginning," Erdoğan underscored, referring to claims that police used excessive force during Taksim protests.

Denouncing those attempting to turn Turkey into a country of chaos and one that imposes strict security measures on its people, Erdoğan stated, "Turkey will not turn back to those days when security averted freedoms and democracy. No sabotage and no provocation take Turkey back to those days when security based policies dominated the country." Erdoğan added, "We will not make concessions on Turkey's security, however we will also never allow for a halt in democracy under the guise of establishing security.

WE WILL NEVER AVERT DEMOCRACY FOR SECURITY

Expressing that for the past ten-and-a-half years that they have been in power, they have always sensitively preserved the freedom-security balance, Prime Minister Erdoğan stated, "There have been some who claim that expanding freedoms and rising democratic standards may lead to security issues. We never fell for this and instead have widened liberties as much as possible. And as freedoms expanded and democratic standards rose, we never experienced a security issue. Quite the contrary we have solidified our solidarity, strengthened our unity and our sense of brotherhood became even more significant. We have become a more peaceful, free and respected nation. We have brought the issue of terrorism which has been ongoing in this country for 30 years now to the stage of resolution.

Prime Minister Erdoğan explained that they are obliged to not only ensure security, but to also do so within the law and democracy and by protecting freedoms and said that they although they will never make concessions on Turkey's security, "We will also never allow anyone to justify security issues to violate the rule of law, halt democracy or restrict freedoms as has been done in the past."

WE HAVE REACHED THE RESOLUTION PROCESS BY WIDENING FREEDOMS

Referring to the ongoing resolution process to put an end to 30 years of terrorism, Erdoğan noted that his government has made significant progress to reach this point of hope not by increasing security measures but instead by sincerely pursuing the balance between security and freedoms. "We have reached this point not by adding further restrictions or turning a blind eye, but quite the opposite by expanding freedoms, establishing paths and winning over hearts," stated Erdoğan.

THE POLICE HAVE PASSED THIS TEST

Drawing on intentions to transform the protests over Taksim's Gezi Park into a systematic and organized campaign against the police, Erdoğan said that the demonstrations targeted the police, the government, democracy and the national will. "The police never stepped out of the bounds of democracy, never violated the law or restricted freedoms; they only successfully fulfilled their duties and orders received from their superiors within the framework of their authority, the scope of law and legitimacy. As I have expressed previously, our police have successfully passed a very important and challenging test of democracy," stated Erdoğan.

Erdoğan said Turkey's police forces have written a heroic saga through never exceeding the scope of law while enduring attacks and provocations that would never be considered acceptable in any other nation. The Prime Minister commended Turkey's police force by stating, "To be able to continue such an extended struggle without veering from dignity or discipline while being hungry and dehydrated for 48 hours straight is, I honestly say, something only our police could have done."