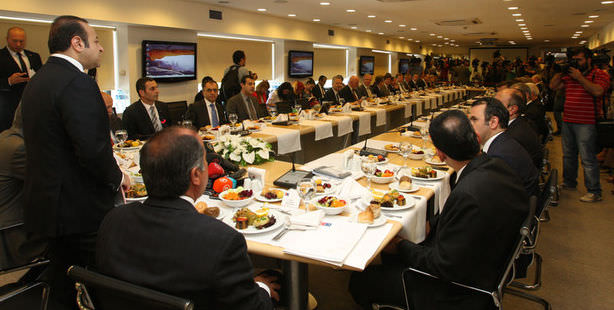 The European Union has agreed to open the 22nd chapter in Turkey’s EU accession process. However, an inter-governmental conference marking the official start of the talks has been postponed until after the EU Commission releases progress reports in mid-October on reforms within candidate nations.

The European Union said the path to the EU remained clear on Tuesday and agreed to open Chapter 22 on "Regional Policy and Coordination of Structural Instruments" with Turkey, however talks are expected to start after an Oct. 9 progress report by the European Commission on reforms within candidate nations.

The EU had planned to open a new chapter in talks with Turkey on Wednesday, reviving its bid to join the bloc, which has been virtually frozen for three years. However Germany, backed by Austria and the Netherlands, blocked the plan and now EU governments will meet again after the report comes out to set a date for the Inter-Governmental Conference (IGC) for talks on Turkey's accession.

Prime Minister Tayyip Erdoğan commented on the EU decision to open the 22nd chapter with Turkey by stating, "This was our expectation. From here on out our related departments will begin working on the chapter. Within a few weeks' time, and after the progress report, our corporate efforts will begin. We have absolutely no problems with this."

Foreign Minister Ahmet Davutoğlu spoke with his German counterpart Foreign Minister Guido Westerwelle four times before Tuesday's decision was reached. Announcing the opening of the chapter, Foreign Minister Davutoğlu referred to the move as an irrevocable decision. "An obstacle in Turkey's relations with the EU has been overcome. We are deciding to hold the technical and procedural meetings at a time frame that is appropriate for both sides and especially parallels the timing of the progress report. What is important now is the confirmation of the irrevocable decision to open a chapter. There are no delays, nor a revisiting of decisions made," said Davutoğlu adding that they also want to open chapters 23 and 24, which are significant for human rights and freedoms.

EU Minister and Chief Negotiator Egemen Bağış commented on the decision by stating, "Once again, significant segments both within and outside of Turkey have now been given the opportunity to comprehend just how important Turkey's EU accession process is. This chapter on regional policies is aimed at decreasing the disparity between regions in Turkey in income distribution and development. This is also a meaningful contribution to the ongoing resolution process to resolve the country's terrorism problem," said Bağış adding that the subsequent opening of political chapters 23 and 24 will also be extremely significant. "Turkey's EU target is a strategic goal that supersedes parties," said Bağış.

EU Minister and Chief negotiator Egemen Bağış held a 3.5 hours-long working lunch with ambassadors of EU countries to Turkey in Ankara on Tuesday. The briefing session on recent protests in Turkey at the invitation of the EU Minister and Chief Negotiator Egemen Bağış was hosted by the Turkish Prime Ministry and Ministry of Interior. Joining Bağış was Ankara Chief of Police Mehmet Kılıçlar and Turkish Prime Minister Recep Tayyip Erdoğan's chief advisor Ibrahim Kalın.

Speaking to reporters after the lunch, Bağış said the meeting allowed them to show the other side of the coin, the backstage reality of what they see from the Western media when it comes to the protests. The EU Minister said they made presentations composed of videos and documents revealing the damage incurred on private and public property by the protesters, as well as provided examples from reactions of EU countries to similar events. During the working lunch, Bağış emphasized that what transpired in Turkey should not be misconstrued as a "Turkish Spring" and stated, "Turkey is not a second-class democracy that will bow down to internal or external pressure."

The EU Ambassadors released a joint statement following the meeting of EU representatives with the Turkish government which stated, "This was the first occasion for the EU missions, collectively, to exchange views with the Government. We expressed our concern over recent developments, in particular the police handling of peaceful protestors and in regards to respect for freedom of the media. We underlined the need to respect fundamental freedoms."

"A good decision in a difficult situation"

German Foreign Minister Guido Westerwelle, who spoke several times to his Turkish counterpart Ahmet Davutoğlu before Tuesday's EU decision to smooth over any ill-feeling, said it was "a good decision in a difficult situation". Speaking to reporters prior to the EU Ministers meeting in Luxembourg, Lithuanian Foreign Minister Linas Linkevicius, who will be taking on the term presidency as of July 1st, expressed support for Turkey's EU bid.

Swedish Foreign Minister Carl Bildt commented that the opening of the chapter is more important than the actual timing of the IGC. Italian Foreign Affairs Minister Emma Bonino remarked that the continent of Europe "needs a fully democratic Turkey to exist within its borders." EU Enlargement Commissioner Stefan Fule announced on Twitter that the Intergovernmental Conference has been postponed until after the Progress Report is released.

"This is a vital period for Europe and Turkey"

Prime Minister Tayyip Erdoğan hosted Secretary General of the Council of Europe Thorbjorn Jagland on Tuesday. During the 1.5 hour-meeting, Jagland stated, "The council of Europe could play an important role in Turkey's EU accession process and especially in the opening of new chapters. The continuation of Turkey's accession process is vital for both Europe and Turkey."

Jagland also met with Foreign Minister Ahmet Davutoğlu after which the two held a joint press conference. "l am very glad to hear the EU decided to open anew chapter in the negotiation with Turkey…I can say Turkey and Council of Europe have been listening to each other. We have a very good dialogue."

Davutoğlu commented on his the meeting with Jagland by stating, "We emphasized both the future of European democracy and the background of the developments in Turkey and the government's approach. We never make concessions from freedoms and we never will. However, the exercising of freedoms is limited by the scope of the law," stated Davutoğlu.

Jagland also had the opportunity to meet with Minister of Justice Sadullah Ergin during his stay in the capital.