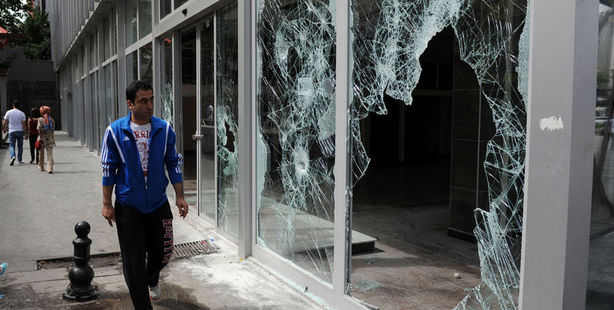 The state will be compensating retailers for damages incurred in the protests as well as issuing reparations for protesters who were out protesting based on environmental awareness yet fell prey to treatment as a terrorist in the commotion of the demonstrations.

The government is getting ready to take a surprising step in regards to the aftermath of the Gezi Park protests. Those defined as "sincere protesters" who were only involved in the protests in order to exercise their democratic rights and did not in any way engage in conflict with the police will be able to receive compensation if they were physically harmed by police forces trying to contain the nationwide demonstrations.

The government, which has been dealing with the Gezi Park protests as a top agenda item for nearly the past month now, is trying to adopt a system to differentiate between the sincere protesters and the provocateurs and organizations that were behind the escalation of events. Efforts will be made to establish distinct concrete steps accordingly, a fact Prime Minister Erdoğan alleged to in a recent address when he stated, "I hold the youths who were sincerely protesting the redevelopment plans separate."

THOSE WHO LOST THEIR SIGHT

The state is currently preparing to compensate for the losses incurred by protesters who took part in demonstrations based on sincere sentiments of environmental awareness and have absolutely no connection with organizations, however were caught in the mayhem and as a result suffered harm. While over 100 protesters were injured in the demonstrations, 11 protesters lost their eyes as a result of tear gas canisters shot by police. All of these individuals will have the right to receive reparations from the state.

According to the ongoing efforts by the Ministry of Justice, individuals considered to the "innocent protesters" will be eligible to receive compensation as being "victims of terrorism". In similar cases in the past, the government has taken on liability, which constitutes an example for the injuries and victims of the Gezi Park demonstrations.

Retailers whose stores were damaged or destroyed in the protests will also be the recipients of good news. Retailers that have incurred significant property damage will also be eligible for state aid and compensation.

The issue, which is expected to be handled at the next Council of Ministers meeting, was also referred to previously by Deputy Prime Minister Bülent Arınç. Relaying that steps will be taken to compensate for the damages incurred by retailers, Arınç had stated, "Our government will definitely deliberate and reach a decision on retailers' demands. Today we also discussed the issue of what can be done for retailers who have suffered from these events and I believe we will be able to deliver them with good news as soon as possible." Providing subsidies, compensation or long-term credit to cover damages suffered by retailers are all options being laid to the table.