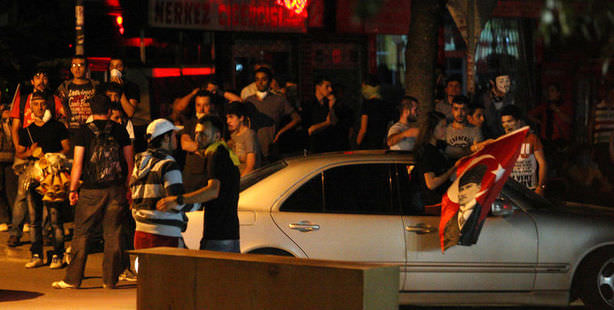 It turns out that fines issued to nearly 100 drivers for violating traffic rules during the protests in Ankara, Izmir and Istanbul, were paid out by the same select number of bank accounts.

It has been revealed that the traffic violation tickets issued to nearly 100 drivers for participating in the Gezi Park protests with their vehicle, for arriving to protests under the influence of alcohol and for disrupting police work were paid off by a select number of joint bank accounts. Financial police have also established through victim and witness testimonies that in certain areas where protests were prevalent, demonstrators used US dollars to make small-scale purchases at markets.

The information received led to question marks amongst investigative units in regards to the financial sources of the nationwide demonstrations. As a result, police have begun looking into the bank accounts of detained suspects in the protests. The Financial Crimes Investigation Board (MASAK) is now looking into the financial transactions of suspicious individuals who have received money transfers from abroad.
The initial investigation by the Financial Crimes Investigation Board which has joined forces with the Financial Police Department has reaped important findings pointing to the protest organizers' financial sources from abroad. Findings also show the expenses of the protests being financed through undisclosed domestic accounts.

The investigation into tracking the financial activities of protesters, which is being conducted jointly by the two departments, has also uncovered interesting new details. It has been determined that nearly 100 protesters, from a number of provinces such as Istanbul, Ankara and Izmir, have received traffic fines for a number of violations including driving while under the influence of alcohol, wrongful parking as well as obstructing police vehicles.

WATER BY THE DOLLAR

The investigation has also detected individuals who were constantly engaged in protests through arriving in cars and honking their horns, transporting other protesters as well as keeping bags of stones, ball bearings and slingshots in the trunks of their vehicles. Investigative units have also determined that these suspect individuals who were issued traffic violations paid them off immediately as if they were readily prepared to receive said fines. Police testimonies have also revealed that certain protesters even purchased water from shopping centers located near demonstrations by paying in dollars.

Based on suspicion, the departments proceeded to further investigate each of these suspect individuals who paid off their police traffic violations via the internet. What the investigation revealed was actually quite interesting. As it turns out, the traffic fines collected by 100 individuals slated to be involved in the protests were all paid off by a select number of joint accounts. According to the information obtained, the police are investigating these accounts through a court order from the prosecution's office and are now mobilizing in order to determine the identities of these individuals. It has also been stated that once the investigation has reaped further results, the bank account holders may be called in to testify. Information has been received that the Financial Crimes Investigation Board and police are supposedly looking into the existence of an organized structure involved in suspect financial transactions.