What remains in the dark on the Gezi protests 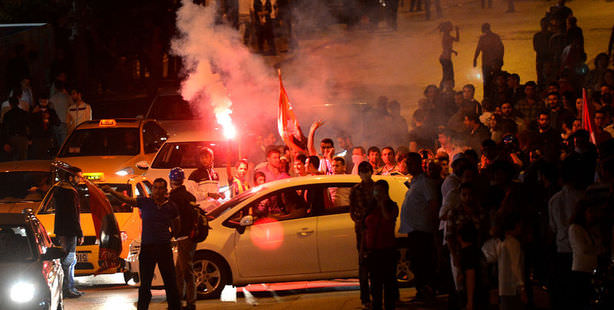 A detailed account of the infamous attack on the head-scarf wearing young mother and innocent by stander as she was returning from a day at the Prince’s Islands with her six-month old baby.

The Gezi protests began on May 27th due to allegations that the removal and relocation of five trees within the park to a nearby forest, would equate to the building of an artillery barracks in its place. In these "environmental" protests; the elected government, elections/the national will, and the opposition to headscarves came to the forefront. Despite the government announcing on the very day the protests began that they had planted 2.8 billion trees in the past 10 years, apologizing for the excessive use of police force, stating that an investigation would be under way against police action, announcing the cancelation of the building project, and creating direct dialogue with the protesters, it still did not suffice to put an end the protests.

The protesters, that began the protests under the guise of environmentalism, took on a whole new level when demonstrators attacked a woman wearing a headscarf and her six-month-old baby. When Prime Minister Erdoğan said, "They attacked the bride of one of my acquaintances" at a group rally, all eyes were suddenly turned on 'that bride'. The aforementioned bride that was attacked, whose initials are Z.D., is the wife of the mayor of the Istanbul borough of Bahçelievler. Before all else she is a mother who was attacked along side her child, due to her beliefs. I just recently read the statement Z.D. gave to the Istanbul Chief Prosecutor's office. While reading it I found myself needing to take periodic breaks. As a covered woman and as a woman that has a motherly nature I was left speechless. My hands still shake as I write this article.

-The Testimony of the Bride-

Friday the first of June, after returning from a trip to the Islands with her friend and her baby, Z.D. was talking on her phone with her husband while trying to cross the road. At that time she realized that a group was passing by returning from the Gezi Park protests with signs and flags in hand and was verbally attacking those they passed while assaulting those that dared reply. Some in the group had black headbands while others wore sports jerseys. The attack began when the group noticed her and began ridiculing her by saying "look at her". Afraid that the group might descend upon her, Z.D. decided to stand against a nearby wall. The remainder of this article I write while bawling tears.

-The Moment of the Attack-

The first attack came from a woman who wore a black headband, as Z.D. says in her testimonial, "walking at the front of the group, approximately 22-23 years of age, skinny build, 1.55 – 1.60 in height, petite, with long black hair, wearing dark mascara, wearing a white tank top with thick straps, with a black picture of Che Guevara on the front, underneath she wore light colored jeans. I had been discovered and she kept coming closer, suddenly she grabbed my headscarf and pulled it up. Before I even realized what was happening she was yelling loudly, "Guys I found Tayyip's… "She then started to shout "come here…" Explaining that she attempted to free herself from the hands of this woman but found herself unable to do so due to the stroller in her hands, Z.D. continued her testimony: "Out of the large group, a male who I was unable to see clearly, came out and slapped me on the right side of the face. I lost my balance and control of the stroller in my hands. I fell to the floor on my back, the crowded group surrounded me, and then individuals began to spit on me and kick me, I tried to get up from off the ground and free myself from this group, but was unable to do so due to the crowd."

The group that was now kicking Z.D. did not neglect to curse at and insult her. "Child of a scoundrel, child of a …, covered...", "we will stage a revolution; we will uproot you from Turkey", "Animal, saddle. We will …. you and Tayyip and send you away from this country,' they said. They continued to kick Z.D. and insult her in this manner.

-"Urinate on her headscarf"-

Z.D.'s terrifying experience doesn't end here. The group of youth that had lost all self-control in the frenzy continued to assault the mother. "I closed myself in to try to protect myself. Amongst the crowd near the stroller there was a 28-30 year old individual, of a bulky build, with brown curly hair, light skinned, with brown eyes, and a thick meaty nose, who was holding the stroller and shaking it, inside my daughter was being tossed around. "If I am not mistaken 3-4 people urinated on me, right at this moment a woman began screaming "her headscarf, piss on her headscarf".

Not satisfied with what they had done thus far, her attackers then began assaulting her in a way that could turn a woman's life inside out. For a moment the kicks stopped, and suddenly the physical attack became a sexual one. The group sexually assaulted different areas of Z.D's body. When it comes to writing about this part of the attack my hands aren't functioning and my fingers are shaking. With manhood and humanity having reached such a low level as to molest a defenseless woman and mother of a child, thinking of a situation like this my hands won't allow me to write what they did.

-They left to burn a car at Inönü (Stadium)-

The person that initiated the assault then yelled: "There is excitement at Inönü Stadium, we are burning a car." Upon hearing this, the group disbands and heads for Inönü Stadium. Z.D. quickly gets off the ground and goes to her baby's stroller 3-4 meters away.

The protesters that attacked the mother due to her headscarf also attacked the 6 month old baby before leaving to set fire to a car. "My 6 month old daughter was crying, under her left leg's knee there was a small scratch and it had bled, and on her left arm there was a bruise, I tried to get her to be quiet in order to collect myself and barely succeeded." Having taken a final glance of her departing attackers, Z.D. noted, "two culprits had beer bottles in their hands and they clinked them together and drank as they cheerfully laughed, the one standing on the left had worn a white striped loose t-shirt, the person on the right wore a cream toned t-shirt."

-The new mother can no longer breastfeed-

About three to four minutes later, Z.D.'s husband walked down to the Kabataş ferry station towards where Z.D. was. She didn't answer when her husband asked, "What happened" in fear that her husband would confront the group of her attackers. She can only tell her husband that she was attacked by a group of protesters due to her headscarf. When Z.D. goes home she saw the bruises on her legs. She took a bath and washed her clothes repeatedly. Due to the attack, she suffers psychological trauma and her breast milk has dried up. When Z.D. finally felt better in June 5th, she went and testified on the assault her and her daughter suffered.