Gezi Park vandalism to be tried in court 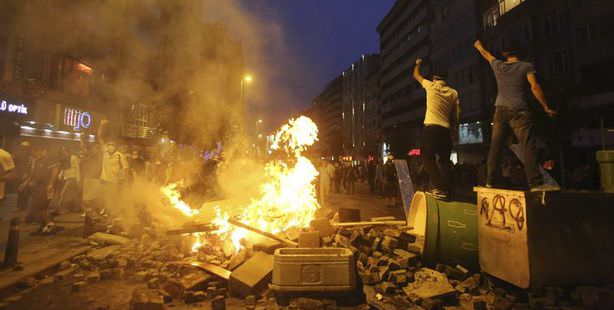 According to a summary of proceedings prepared by the Department of Police and sent to the Ankara Chief Public Prosecutor, 104 businesses, 28 official institutions, 48 banks, 21 ATM machines and 74 vehicles were destroyed in the Gezi Park protests.

The Department of Police has submitted a summary of proceedings to the Chief Public Prosecutor in Ankara which details the property damage suffered by 104 business locations, 28 official institutions and 48 banks and lists the 21 bank teller machines and 74 automobiles which were completely destroyed in demonstrations.

Twenty retailers in Istanbul and 260 in Ankara have filed complaints for vandalism suffered during the nationwide protests which erupted over redevelopment plans for Taksim's Gezi Park. The summary of proceedings prepared by police notes that although the protests began based on democratic demands, as the demonstrations progressed "terrorist organizations, and other open-air structures belonging to the organization were found to be involved in demonstrations to ensure the protests quickly transformed into other attempted bids."

The police record also stated that "the terrorist acts of terrorist organizations attempting to control the protests in order to channel demonstrations for their own gain and ideology through the use of social media, political actors and the national and foreign press, has now become an element of threat."