US diplomat summoned to Foreign Ministry to explain whistleblowing scandal 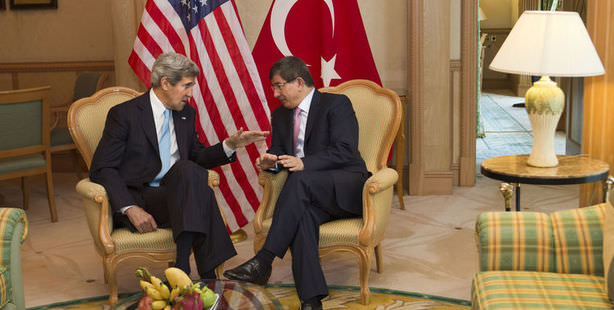 US Charge d'Affaires Jess Baily was summoned to the Turkish Foreign Ministry on Wednesday for a renewal of Foreign Minister Ahmet Davutoğlu’s demand for information in regards to the whistleblowing scandal.

US Charge d'Affaires Jess Baily was summoned Wednesday to the Turkish Foreign Ministry for a repeated call by Foreign Minister Ahmet Davutoğlu's for an explanation and information about the whistleblowing scandal.

"The allegations that appeared on leading European press organs about the US National Security Agency's (NSA) wiretapping and keeping track of internet records of 38 countries' diplomatic representations including our country are worrisome," a statement released by the ministry said. During their meeting in Brunei for an ASEAN summit meeting, Davutoğlu conveyed his expectation for an explanation on the issue to US Secretary of State John F. Kerry, the statement said.

The US Charge d'Affaires Jess Baily was invited to the Foreign Ministry on Wednesday by Deputy Undersecretary Omer Ondon to respond to Davutoğlu's call for information about the whistleblowing scandal, explained the Foreign Ministry statement, which also added, "Considering our relations with the US, which are based on mutual trust, cooperation and transparency, a clarification on the allegations is necessary. Within the light of the answers received from US authorities, we will make an appropriate evaluation."

According to a 'special' report released by Britain's Guardian daily, one of the documents leaked by former CIA operative Edward Snowden reveals that the U.S. diplomatic missions of a number of countries, including Turkey, were "targets". The article reports that the leaked document dated September, 2010 "details an extraordinary range of spying methods used against each target from bugs implanted in electronic communications gear to taps into cables to the collection of transmissions with specialized antennae."