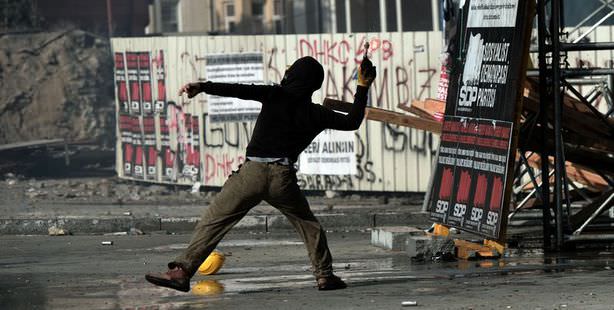 Previously classified by the Supreme Court of Appeals as a liquefied bomb, after the Gezi Park protests, Molotov cocktails will soon be legally considered as weapons.

Prime Minister Recep Tayyip Erdoğan has delivered the message that certain steps may be taken to strengthen Turkey's police force. As a result, a draft proposal which will classify Molotov cocktails as weapons will most likely be brought up for parliamentary approval prior to the assembly break. Erdoğan had requested that legislation include the classification of Molotov cocktails as weapons. In addition, the draft proposal package that will be brought to parliament also foresees increasing punishment for throwing stones at police, resisting public servants, setting buses, bus stops or billboards on fire and smashing windows.

"A TOOL FOR ATTACK AND DEFENSE"

The Weapons Law Draft which is awaiting approval by the Parliamentary Internal Affairs Commission, takes into consideration Supreme Court of Appeal rulings, and defines Molotov cocktails as "a handmade device for attack or defense which uses flammable materials."

While those charged with using Molotov cocktails may face between three to eight year prison sentences, if determined their usage was in connection to organization activities, the sentence will be increased by an additional half term of the original sentence. According to the Turkish Criminal Code, sentences ranging between one and six years are issued for damaging public property. Individuals, who obstruct a public servant from doing their job through the use of threat or force, may be sentenced a prison term spanning anywhere from six months up to three years. If the crime is committed by more than one individual, then the sentence served is increased by one-third the amount of the original sentence.