“Anything outside of the poll booths is unlawful” 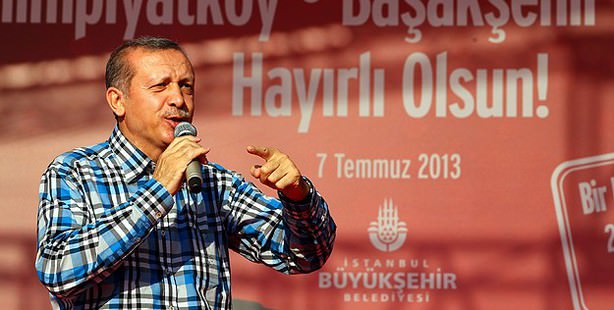 Prime Minister Erdoğan said on Sunday that any type of military coup was bad no matter who is targeted and emphasized that in democracies, accounts are settled in the poll booths.

Prime Minister Recep Tayyip Erdoğan delivered a speech at the opening of the new Otogar-Başakşehir metro line on Sunday during which he addressed a number of pressing issues as well as the upcoming start of the month of Ramadan on Tuesday. "We all need to remember the impoverished this month once again," said Erdoğan who went on to suggest that instead of going to five-star hotels, during the month of Ramadan citizens should share a bowl of soup with their neighbors.

During the inauguration ceremony, Prime Minister Erdoğan noted that due to the new tube line, there will be an 86 million ton decrease in the release of carbon emissions and stated, "Environmentalists should come and take a look at this, the AK Party are the true environmentalists." Calling on the main opposition Republican People's Party (CHP), Erdoğan said being environmental does not come from yelling and screaming in Taksim Square and asked, "Tell me, what have you done in regards to the emission released into the environment from this gas?"

Erdoğan also expressed that they in no way believe that whatever they want is what should happen, however he added, "there also cannot be the belief that whatever I don't want won't happen."
Pointing out that the place for those who want to rule the nation is in the poll booths, Prime Minister Erdoğan stated, "We have objected to the majority ruling over the minority, however, we can also not allow the minority, which has gathered the media, international dark forces and illegal powers behind them, to impose on the majority."

Standing up for Turkey's police force, Erdoğan stated, "There is not a single location in this city that can be besieged by occupational forces. If such an attempt is made, they will be faced with the state. "The police have three paths they take if you are doing something illegal. First they warn, then they use water cannon and later move on to tear gas. However, as the police are following this order, what are you supposed to do about those who fire at police? What are you going to do about my police officer who was martyred," asked Erdoğan.

Prime Minister Erdoğan also touched upon the situation in Egypt by expressing that they are watching the developments with concern. "We are on the side of democracy in Egypt and we are united with the Egyptian public. A coup has transpired in Egypt and no one should be deceived otherwise," said Erdoğan adding that any type of military coup was bad no matter who was targeted. The Prime Minister referred to coups as being the death of democracy and the future. "You may not like your ruling government. However, in democracy there are processes and there are poll booths. During that timeframe, accounts are settled in the poll booths. Any other way is unlawful," said Erdoğan.

Erdoğan qualified the military coup in Egypt that ousted the country's first democratically elected President Mohammad Morsi as being a test of sincerity for the entire world and stated, "International establishments did not display a stance of principle in light of what has happened. Why isn't the West, which would always tell us in personal conversations that they were against coups, not saying anything now? The EU and the UN, who have always said they are against coups, why are you remaining silent on Egypt?"

Prime Minister Erdoğan called for the release of all of the politicians that have been arrested in Egypt, and especially Morsi and stated, "Those who cannot say that this is a clear coup are in fact supporters of the coup."

The opening of the Başakşehir-Otogar metro

On Monday, Erdoğan not only addressed participants at the inauguration ceremony for the 21.7 kilometer-long Otogar-Bağcılar-Başakşehir- Olimpiyatköy metro line, which was realized with a 2.865 billion investment, but he also officially opened the tube line by riding from the Bağcılar stop all the way to the Metrokent stop in Başakşehir.

Thousands came out to witness yesterday's inauguration center for the metro line which is anticipated to offer a significant relief to Istanbul's traffic congestion. With the opening of this newest line, the rail system in Istanbul has now reached 124.4 kilometers. In 2004, the rail system in the city was just 45.1 kilometers long; however a total 79.3 kilometers of new lines have been added to the system over the past nine years.