“They shouldn’t pay the price we have paid” 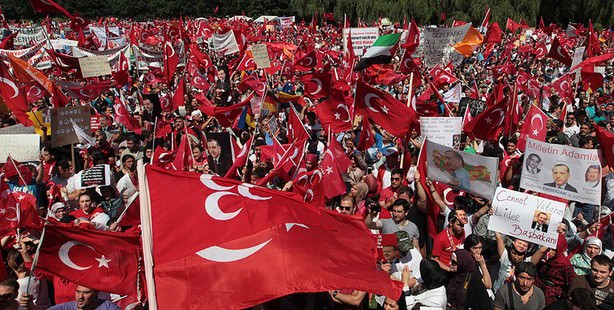 Prime Minister Recep Tayyip Erdoğan addressed Turks in Germany via a video-conference during a rally held in his honor entitled "Respect for Democracy". Fifty-thousand people gathered from a number of countries in Europe and convened in the German city of Dusseldorf in order to participate in the rally in support of the Turkish government.

Süleyman Çelik, the President of the Union of European Turkish Democrats (UETD), which organized the rally, stated, "We are standing up for Erdoğan to ensure we have a Turkey that progresses and not a standing Turkey."

Erdoğan addressed Turkish European residents and supporters via video-conference by stating, "I want each and every one of you to feel proud of your flag, nation, and your home country. No one can harm Turkey as long as we remain united."

The Prime Minister went on to deliver a series of messages regarding democracy, Gezi Park and the situation in Egypt by stating, "Those who are unable to accept the elections results, those unable to digest democracy, seem to think that they will be able to reap results through occupying, burning and looting the streets. They believe they will be able to get somewhere by embracing the media, social media and Europe's intolerance towards Turkey. However, you should have no such concerns. Turkey is not the same Turkey it was. As long as you stake a claim to this country, then be well aware, no one will be able to interfere in democracy."

Erdoğan also lashed out at the military coup in Egypt that ousted the country's first democratically elected President Mohammad Morsi, saying forces removing Morsi "could not bear an elected president for even just one year. They have shown no respect to the will of the people in Egypt." Prime Minister Erdoğan also stated, "There was a national public will established a year ago in Egypt, a country that succumbed to the rule of an autocratic regime for nearly 70 years. Morsi became the president as a result of this national will." Erdoğan said that the Egyptian government was overdriven by combined forces, including an embargo implemented by the global economy.

"We have an unlimited amount of love and respect for the Egyptian people," said Erdoğan, adding, "We do not want our brothers in Egypt to pay the price we have had to pay. The problem right now is with the military junta. And as for those who act together with the junta, it is quite clear that we undoubtedly have a very different understanding of democracy."