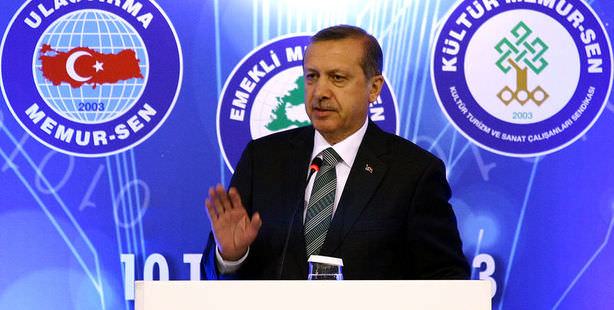 Speaking at a fast breaking dinner hosted by the Civil Servants’ Trade Union, Prime Minister Erdoğan called on the opposition to pass through parliament all 48 articles of the new constitution for which a consensus has already been reached.

Prime Minister Recep Tayyip Erdoğan attended a fast breaking dinner (iftar) hosted by the Civil Servants' Trade Union (Genç Memur-Sen) in Ankara on Wednesday night during which he called on the opposition to put the 48 articles agreed upon for the new constitution to a parliamentary vote in order "to pass them all in just a week."

THE ISSUE IS NOT THE PRESIDENTIAL SYSTEM: Erdoğan addressed the leader of the main opposition Republican People's Party (CHP) who urged the Prime Minister to have his ruling Justice and Democracy (AK) Party back down from the presidential system, saying, "then, we will talk."

"Believe me, if I believed this to be true, I would be the one to take the first step. However, it is one thing at night and another in the morning. There are 48 articles that have been agreed on at present," said Erdoğan, adding that other articles are held up with annotations by parties. "Let us not fool one another, the issue is not the presidential system" said Erdoğan.

IF YOU ARE SINCERE, LET'S WORK IT OUT: Calling on the main opposition to immediately pass through assembly the 48 articles of which the Parliamentary Conciliation Constitution Commission has reached an agreement on, PM Erdoğan said, "Let's embark on intensive efforts on these articles and refrain from going on holiday. I will take on the duty of saying this to my comrades. Now you begin working at least 10-15 hours a day as well and let's finish this constitution business this summer. A consensus has been reached on 48 articles. Let's bring that number up to 68 or 78, and if you can't, then let's pass the previously agreed upon 48 articles through parliament in a week. Let's hold extraordinary assembly meetings. Let us quickly pass these 48 articles in order to see just how sincere you are and to prove how since we are."

THERE ARE NO BUT'S IN DEMOCRACY: Prime Minister Erdoğan also commented on the division within the main opposition party. "Some say that what transpired in Egypt could happen here. The one in charge says, 'pull yourselves together; we are against coups, however…' Well, there are no buts, yets or howevers in democracy. Democracy is derived from the will of the people," said Erdoğan.

WHAT YOU SEE IN THE MIRROR IS IMPORTANT: "At the end of the day, everyone is going to look in the mirror. While some see the innocent blood of the oppressed on their hands and in their face, some will see the gratification of standing up right," Erdoğan told union members.

WE DO WHAT IS BECOMING OF US

Prime Minister Erdoğan also commented on the recent violence in Egypt by stating, "We are saddened by the harming of even a single hair belonging to the Egyptian public. I wonder how those who killed our 53 Egyptian brothers during a prayer ceremony will account for their actions in front of God. How will the murderer and his supporters who killed nearly 100,000 people in Syria account for this in the eternal life? There is nowhere in the world where coup perpetrators are reminisced and there never will be," said Erdoğan.