Istanbul rallies in support of Morsi and democracy 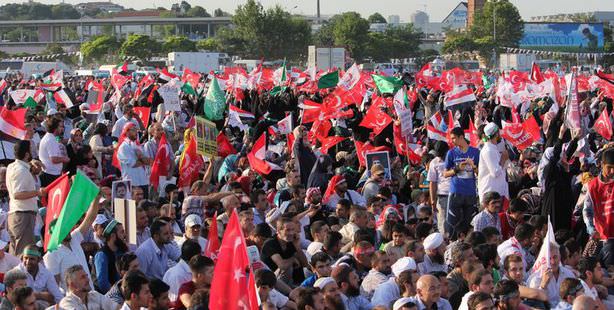 On Sunday, the Istanbul District Department of the opposition Felicity Party (Saadet Partisi) held a rally entitled, "No to Coups, Support for the Egyptian Public" in Istanbul's Kazlıçeşme Square.

Speaking at the rally, Felicity Party Deputy Chairman Temel Karamollaoğlu stated that similar situations as to what is transpiring in Egypt, was witnessed before in Afghanistan and Iraq and expressed that Muslim's are being subjected to oppression.

"These are Zionist co-conspirators who are not breaking away from the orders of instigators, Western imperialism and Zionists. A great injustice was done to both Morsi and the Ihvan-i Muslimin (Muslim Brotherhood). The government was made an instrument in this injustice," said Karamollaoğlu.
Egypt's Muslim Brotherhood Secretary-General İbrahim Münir also addressed the crowds, stating, "The people of Egypt will continue to stage their resistance without fear and yielding through peaceful demonstrations."