What if the Occupy Gezi protests occurred in New York? 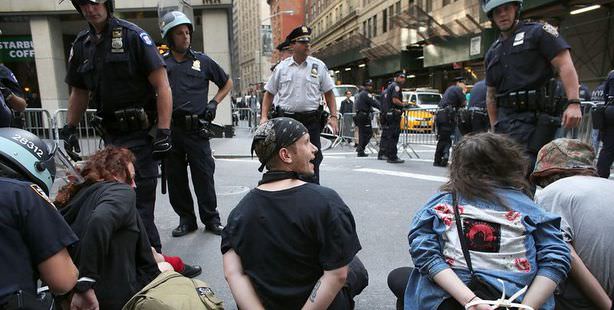 New York and Istanbul have many similarities. Both are among the world’s largest metropolises, both happen to be located on and divided by bodies of water.

Both are home to people from very different cultures and walks of life as they are both bastions of diversity. The fact that these two great cities have so much in common, from the menial similarities such as weather and geographic positioning, to the much more important and defining aspects of urban culture such as city planning and ordinances, that after viewing the events of the past month, involving the Occupy Gezi protests in Istanbul, one is left to think; what if these protests had occurred in New York? Would the police reaction be different? Surely the United States, the iconic poster child of democracy has laws to prevent such hostilities, right? But upon closer inspection, it becomes evident that the similarity between the two cities transcends those of culture and the menial, extending deep into laws and bureaucracy as well.

The Times Square of Turkey

To understand the massive toll of the protests it would become necessary to formulate a comparison to an area of the world the west is more familiar with. Bryant Park in New York City is a small park of 39,000 meters squared, situated next to Times Square. Times Square, like Taksim is the largest tourist center in the center of the city, and like Bryant Park, Gezi Park is a small park of a nearly identical 38,000 meters squared. Culturally both parks have been used as outlets to rest after a days work, or to stop by for a short rest and a coffee, unless there are planned events taking place.

Down to the legalities

Protesting is a legally allowed right in both Turkey and the United States, though both of these two nations have a set of guidelines to follow when it comes to engaging in legal acts of protests. It is true that no permit is required to conduct a protest on public property both in the US, and in Turkey; though many neglect to mention that this too has a guideline within their arguments. As the American Civil Liberties Union (ACLU) simply puts it;

"…you can picket or leaflet in public places by yourself or in small groups without a permit so long as you are not blocking streets or sidewalks…. If you plan to or actually block passage on a street or sidewalk, you must apply for a permit."

Basically the same law applies when it comes to protesting within Turkey as well, and as was the case with the Gezi Park protests in Istanbul. The unpermitted protests brought not only the traffic in Taksim square to an impenetrable stand still, but the protests served to make transportation on the streets and sidewalks around the square an impossibility. If this same scenario were applied to Times Square, 42nd street and the other streets surrounding the square and the park, this too in the US would be considered an illegal protest. One in which riot police would be dispatched to disperse the unpermitted protesters.

Another obligatory rule for conducting a legal protest under the confines of the first amendment rights in the United States is to be orderly, and not even offer the threat of violence or harm to surrounding people or property, or as the ACLU puts it,

"The First Amendment broadly protects speech, including controversial viewpoints and criticism of virtually anything, including government officials, but there are limits. You can be arrested for encouraging "imminent" violence or other immediate illegal activities that threaten harm to people or property. It's a federal crime to threaten to harm the president or vice president. (Threatening the President [or his successor] of the United States is a class D felony under United States Code Title 18, Section 871)."

These would be the greatest issues throughout the protests. The US and Turkey are also very similar when it comes to the prevention of injury and vandalism as a result of ensuing protests. During the whole duration of these protests, the Turkish public fell witness to sights of protesters throwing a vast array of projectiles, from bricks removed from sidewalks (which alone constitutes harm to property), to petrol bombs, Molotov Cocktails and even fireworks. Scrap metal such as rebar was used in altercations with the police. To make barricades, protesters raided construction sites and restaurants for materials. A vast array of public taxpayer property, along with the private property of nearby shops and businesses were damaged or stolen.

To better understand this aspect of the protests, just imagine, groups of marginal militants, throwing the aforementioned projectiles in the vague direction of police vehicles within a densely populated Times Square. Imagine all the bus and metro stops leading up to Bryant Park and Times Square in a half-kilometer radius being completely destroyed beyond use, the damage also being visible in ATM machines, shop windows, public busses, municipality and police vehicles. The protesters' vandalism was even directed at a few privately owned vehicles as well. All in all imagine a Times Square that suffered over 53 million dollars in damage over the course of just two weeks…

When examining the Gezi Park protests through the lens of the existing demonstration laws in the United States, it quickly becomes visible that these protests were in-fact not the peaceful protests the US and European media made them out to be. These same circumstances substituted into a parallel situation in the United States too would be deemed illegal, and the same police action would be merited.

Where the laws of the US and Turkey differ when it comes to protests...

The US has harsher laws than Turkey when it comes to protesting in some contexts. The US has stern laws on noise pollution, and thus protests that would yield large levels of noise are restricted. A recent culturally-fitting example of this could be seen in the protests of Fethullah Gülen on the 14th of July. This protest took place in-front of Gülen's personal residence in Pennsylvania saw the police not allow the protesters to honk their cars horns and engage in loud chants.

Though up to a certain point the legal regulations on what constitutes legal and illegal protests are the same between both Turkey and the United States, the US took their rights to respond to illegal protests a world further with the H.R. 347 laws signed by President Obama on the 8th of March just last year.

H.R. 347, entails that it is a federal crime to, "Engage in disorderly or disruptive conduct" or "impede or disrupt the orderly conduct of Government business or official functions."

Though this description by itself is very vague, the danger in H.R. 347 is this very vagueness. Though technically the law applies to secret service protected events, the vagueness of it allows for it to be applied to all events in which, "A building or grounds so restricted in conjunction with an event designated as a special event of national significance."

Though it doesn't stop there, under H.R. 347, disobeying these new set of laws comes with a one-year prison sentence, which can be increased to 10 if the convicted was armed at the time.

But with this fancy wording what does H.R. 347 actually come down to?

Simply put, H.R. 347 allows for the arresting of civilians found demonstrating on any grounds the state sees as important or restricted due to any variety of reasons of their choosing. Though H.R. 347 was intended to protect any vast array of high profile political individuals that find themselves under the protection of the Secret Service, its intentional vagueness can be used to apply to any scenario in which a government feels threatened, whether a leading politician secretly visits a debated ground, intends to, or even if they do not. Under the pretexts of the constitutionally debatable H.R. 347 the United States' laws on protests take a steep turn in the ability it gives the government to intercede and make arrests that the laws in Turkey still protect against.

What would the outcome of protests similar to the Gezi protests be like in New York's Time Square under the pretext of H.R. 347?

Considering the scale of the protests, and their location in a central economic district like Times Square, under the pretext of H.R. 347 a government ruling would certainly find that the protests would, "impede or disrupt the orderly conduct of Government business or official functions". This would be cause enough for the US government use the necessary force to stop such protests. Those that attended the protests in possession of stones, rebars, Molotov Cocktails and other similar such weapons would face 10-year sentences, while those detained without such paraphernalia on their bodies would face one-year in prison.

All put into context

The Gezi Park protests, when substituted into a parallel situation within the context of the United States, and when examined through the lens of the U.S. demonstration laws, we are led to the conclusion that despite how the U.S. media attempted to portray the nature of the protesters as "peaceful" while attempting to vilify the Turkish police and state, the same set of scenarios would yield to the same, if not a more drastic response in the US.

Under the lens of the United States' laws on protesting, not only were the actions of the protesters outside their legal means, the mass destruction that they brought with them would entitle the events that transpired to be an issue of national security. Thus, due to the new, atrociously strict coverage of the laws brought on by H.R. 347 that has stripped the public of much that is offered by the first amendment, the police forces in the United States would be permitted to react in a manner far more severe than their counterparts in Turkey.