Clashes continue but with less frequency on the Turkish-Syrian border 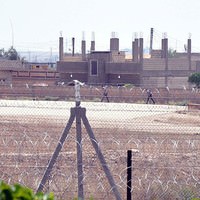 Clashes between the PKK terrorist organization and the Al-Nusra Front in Al-Hasakah’s Rasulayn region of Syria, though on a less frequent basis.

Clashes between the PKK terrorist organization and the Al-Nusra Front in Al-Hasakah's Rasulayn region of Syria, though on a less frequent basis.

Municipality loudspeakers made announcements advising that citizens remain indoors if possible and away from their windows in Sanliurfa's Ceylanpinar district, located on the Turkey's Syrian border.

Safety measures have in recent days been heightened within the region, and the citizens only wish that the Syrian civil war comes to an end as soon as possible.