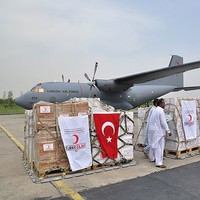 Turkey gave more than $1 billion in humanitarian aid in 2012, making it the fourth largest donor, according to a report by the London-based anti-poverty organization Development Initiatives.

Turkey ranks third among the "most generous" countries behind Luxembourg and Sweden, giving 0.13% of its gross national income in aid.

The global aid provided by governments, which the report says accounts for 70% of total annual humanitarian aid, amounted to $12.9 billion, down from $13.8 billion from a year earlier. Turkey provided 8% of the total figure.

The aid was still inadequate, however, as only $5.6 billion of the $8.9 billion funding requirement, determined by the United Nations (UN), could be met.

What is notable about Turkey's aid figures, as well as the global aid landscape, was a yearly increase of $775 million in Turkey's donations, which means the country almost quadrupled its contributions compared to 2011, according to data presented within the report.

"Turkey's increase in 2012 shows how humanitarian assistance from one country, for which better data are only just becoming available, can have a significant impact on the overall picture," the report said.

It is likely that a significant proportion of this contribution was spent on housing Syrian refugees within the country, it added.

Pakistan, Somalia and Iraq made up 67% of Turkish aid between 2007 and 2011, the report said, while the largest recipient of Turkey's humanitarian assistance was Somalia with $77.7m.

The Global Humanitarian Assistance 2013 report was submitted at a conference of the UN Economic and Social Council in Geneva.