FM Davutoğlu: U.S. Syria plan is too little, too late 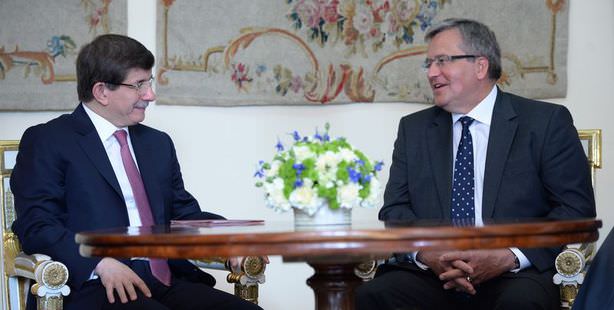 Foreign Minister Davutoğlu discussed the United States’ five-option plan for Syria and stated, “If it doesn’t work out then all other alternatives, including banning flights, as was the case with Bosnia and Kosovo, should be considered.”

Foreign Minister Ahmet Davutoğlu commented on the United States' five-option military plan for dealing with the crisis in Syria, from Warsaw, Poland. "It would be extremely beneficial in terms of international legitimacy if these options could be implemented with a UN Security Council ruling. If this is not possible, then all other alternatives, including banning flights as was the case with Bosnia and Kosovo, should be considered," Davutoğlu told reporters.

Davutoğlu spoke with U.S. Secretary of State John Kerry over the phone on Monday and will be speaking with his U.S. counterpart again in the days to come.

PRECAUTIONS COULD HAVE BEEN TAKEN FROM THE START: "There is a rule in situations of crisis such as this. It was experienced in both Bosnia and Iraq. If precautionary measures are not taken in time, then even further comprehensive measures taken at later stages can remain insufficient. If some of the precautions being mentioned now had been implemented for less cost and at an earlier stage, especially by the UN, then there may never have been a need for all of this," said Davutoğlu.

TOO LITTLE, TOO LATE: Foreign Minister Davutoğlu referred to the plan being presented now as "too little, too late" and stated that precautionary measures could have been taken before the massacre reached this level. "The use of scud missiles, air bombardments and chemical weapons could have all been prevented. If a number of the measures being discussed by U.S. joint Chiefs Chairman Gen. Martin Dempsey had been conducted at a lesser scale in the initial stages, then this number of people would not have died and there may not have remained a need for these sorts of comprehensive measures," Davutoğlu told reporters.

A CLEAR MESSAGE NEEDS TO BE DELIVERED: When asked if he felt the U.S.'s options were applicable, Foreign Minister Davutoğlu said that a number indeed were and added that the Syrian regime needs to be delivered a clear message, otherwise the crisis will expand. "It would be extremely beneficial in terms of international legitimacy if these options could be implemented with a UN Security Council ruling. If this is not possible, then all other alternatives, including banning flights as was the case with Bosnia and Kosovo should be considered," said Davutoğlu.

DAVUTOĞLU VISITS POLISH PRESIDENTIAL PALACE
During an official visit to Poland, Foreign Minister Ahmet Davutoğlu was hosted at the Presidential Palace in Warsaw by President of Poland Bronislaw Komorowski. During his stay, Davutoğlu attended an Ambassador's Conference as a guest of honor and also had the opportunity to meet with his Polish counterpart.