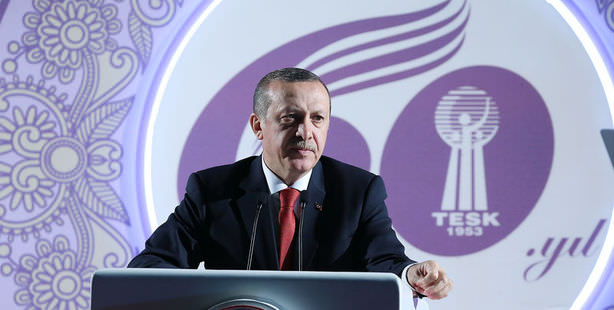 Prime Minister Erdoğan spoke out about the calls made to ‘stop the economy” during the Gezi Park protests and referred to the notion of bringing down the nation’s tradesmen in an attempt to topple the government as being a barbaric one.

Prime Minister Recep Tayyip Erdoğan addressed certain calls made during the Gezi Park protest to halt consumption for six months in an effort to stunt the economy by stating, "You see how furious they have become. The notion that 'if we bring down the tradesmen we will topple the government is, in a single word, barbaric."

Speaking at an iftar (fast-breaking) dinner hosted by the Turkish Tradesmen and Craftsmen Confederation (TESK) in Kastamonu on Friday, Erdoğan emphasized that Turkey is a nation that is strong enough to not succumb to such calls and the attacks being staged and went on to relay the following messages:

In reference to certain calls made by Gezi protesters to stop consuming for six months in order to halt the economy, Erdoğan stated, "You see how furious they have become. The notion that 'if we bring down the tradesmen we will topple the government is, in a single word, barbaric."

Prime Minister Erdoğan went on to refer to those protesters trying to bring down the economy as their response to the government as being "no different than the pitiful rodents trying to bore open up a hole in the bottom of a ship in which our 76 million are all together."

Emphasizing that Turkey is a nation that is strong enough to not succumb to such calls and attacks, Erdoğan said that only someone who had no connections or bonds or respect for the ballot boxes would make such calls to cause their country to collapse.

The Prime Minister mentioned that tradesman have become the victims of the illegal demonstrations that have transpired throughout the country and especially in Istanbul and Ankara. "They were even targeted. While a significant number of shopkeepers' businesses were undermined, they were also threatened and attacked. Shops were looted. The calls for common sense made by merchants were not heeded. They instead faced violent opposition. Whereas the tradesmen have always been a unified segment that has maintained distance from daily political issues. Throughout history, Turkey's tradesmen have always taken a stand against vandalism, barbarism and violence," said Erdoğan.

Commending Turkey's tradesmen for realizing that Turkey's atmosphere of stability and security was targeted in the protests, and for taking a stand, the Prime Minister stated, "There is already no doubt that our tradesman will stand by those who are 'doing' and not 'destroying.' Our duty is to establish security and stability and to eradicate all obstacles," said Erdoğan.

THERE IS NO INTERFERENCE IN LIFESTYLES

Prime Minister Erdoğan also addressed criticism that his ruling Justice and Development (AK) Party has intentions of meddling in people's lifestyles, by stating, "There are comments being made constantly that people's lifestyle should not be meddled with. Whose lifestyle or manner of dress has this government ever meddled with? Their concerns are something else. Right here, with you and the support of our nation, we will continue to ensure Turkey's stability and growth by foiling their games and those of the organizations behind them. We need unity, brotherhood and solidarity. I am requesting our tradesman continue to protect this brotherhood in the same manner that they have done so for hundreds of years."