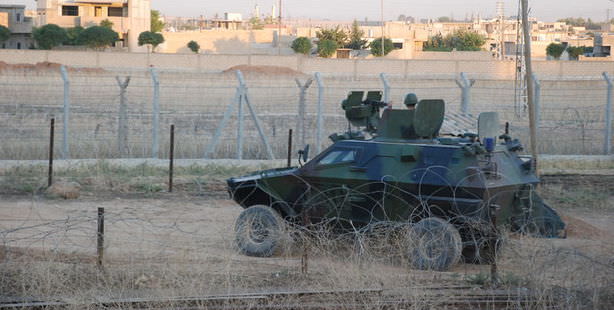 Amid clashes in Syria's Ras Al Ayn, two shells fell onto the Turkish side of the border killing 1 and wounding 2 others, Turkish General Staff says.

Turkish General Staff announced on Saturday that Turkish guards fired back at 15 Syrian armed civilians who were approaching Turkey disobeying the "stop" alert and fired at the guards on late Friday.

Issuing a written statement on its official website, Turkish General Staff said Turkish guards at the Border Post on the Turkish-Syrian border noticed 15 civilians reputed of Syrian origin coming from Syrian side and drawing close to the Turkish side at about 21:05 local time on Friday.

However, Syrian civilians fired 5 times at the Turkish guards and were answered by the guards fırıng in responce, as the statement said.

In another incident, two shells fell on Friday into the Turkish side of the Syrian border during the ongoing clashes in Ras Al Ayn town of Syria's Hasakah city between the Syrian opposition and Kurdish terrorist organization PKK's militia in Syria (PYD).

Turkish General Staff also issued a statement on its official website regarding the incident, stating that "two artillery shells fell 1 kilometer inside the Turkish border in the Ceylanpinar town on the Turkish border city of Sanliurfa amid the clashes in Syria's Ras Al Ayn at around 19:50 local time on Friday."

The statement went on to say that the shells left 1 Turkish citizen dead, Sukru Kahraman, 43, injuring his two sons Mehmet, 23, and Ahmet Kahraman, 12.