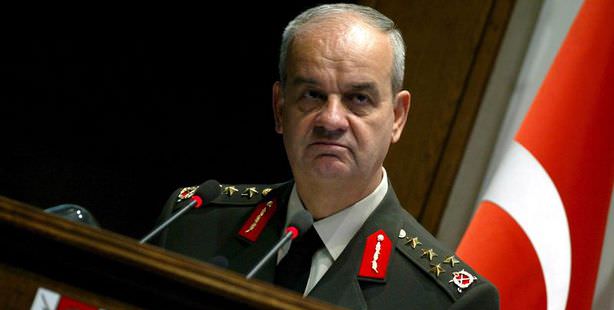 A Turkish court Monday sentenced a former army chief to life in prison for his role in a plot to bring down the government of Prime Minister Recep Tayyip Erdogan.

Ilker Basbug was arrested in 2012 and accused along with 275 army officers, journalists and academics of membership in Ergenekon, a right-wing underground organization that allegedly plotted to stage a military coup. His term as military chief ended in 2010.

The court in Silivri, 90 kilometres west of Istanbul, acquitted 21 defendants. Other defendants received sentences ranging from six to nearly 50 years.

Police used tear gas to disperse crowds gathered in fields near the court before judges began reading out the verdicts. Highways leading to the court were closed as part of security measures to
block possible demonstrations. A military helicopter flew above.

Turkey's powerful military, which sees itself as the ultimate guardian of the state and secularism, has staged three military coups since 1960 and a "soft coup" in 1997. Elements of the military are
known to be opposed to Erdogan's Justice and Democracy party (AK Party), which is mainly conservative.

Ergenekon is the name that prosecutors said members of the underground group called themselves and refers to the mythical Turkic homeland in Central Asia.

Prosecutors said the group also had plans to carry out assassinations of political and social leaders, including Erdogan, former chief of the general staff Yasar Buyukanit and Nobel Prize-winning author Orhan Pamuk.

The Ergenekon trial parallels the Sledgehammer case, in which 196 retired and active officers - including the former commanders of the navy and air force - are alleged to have planned a coup in 2003 in a
plot code-named Sledgehammer.

Details of Sledgehammer plot were first revealed in documents leaked to the liberal newspaper Taraf in January 2010.

The plot was said to have included the bombing of two major mosques in Istanbul, an attack on a military museum by people disguised as Islamist fundamentalists and the provocation of military tensions with neighbouring Greece.

It is alleged that these events would have thrown the country into chaos, allowing the military to declare a state of emergency and overthrow the AKP government.

After the trial intellectual liberals mentioning how democracy in Turkey has been strengthened, are stating that the coup period in Turkey is now over, and that the rule of law is now in effect in Turkey. On the other hand, ultra-nationalists, Kemalist organizations released statements stating that the believed that the decided verdicts were too tough.

The court ruled to release 16 suspects considering time they spent in prison.

The following are some of the verdicts that emerged as an outcome of the trial:

- The court separated the cases of the two fugitive suspects, Turan Çömez and Bedrettin Dalan.

- Retired Col. Arif Doğan, who recently admitted to establishing JİTEM -- a clandestine and illicit unit within the gendarmerie, gets 47 years.

- Ali Yasak, a well-known gangster linked to the figures in the Susurluk incident, gets six years three months.

- Retired Gen. Veli Küçük, who is a key suspect in the trial, gets life sentence.

- Bedirhan Şinal, a suspect of the attack on the Cumhuriyet daily, sentenced to 18 years eight months in prison.

The court ruled to release 16 suspects including Haberal, Otuzbiroğlu and Çubuklu considering time they spent in prison.