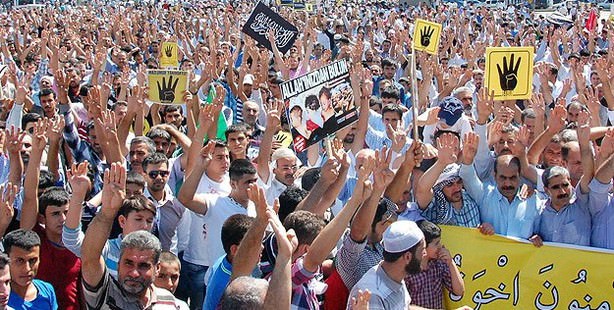 Protests were held across Turkey in nearly two dozens cities against Egypt's military coup as well as Wednesday's chemical attack that hit Syria that killed over 1,000 civilians.

Following the Friday prayer, many Turkish citizens gathered at the yard of Fatih Mosque in Istanbul and chanted slogans against Syria's Bashar al-Assad and Egypt's Abdel Fattah al-Sisi and marched towards the city hall.

Police helped the demonstrators by clearing the way for them so that they could easily continue their protests while many citizens passing through the streets supported the slogans and made the Rabaa sign, which has become the symbol of struggling against massacres in Egypt.

The protests, organised by the 'Solidarity Platform for Syrian and Egyptian people' which was formed by Turkish non-governmental organisations, ended in front of Istanbul's city hall.

"It is neither the fate of the Muslim world, nor that of Muslim people, to face bloodbath," said Kenan Alpay Friday, vice president of Ozgur-Der (The Freedom Association), a Turkish non governmental organisation. "Here is the simplest truth: Neither Muslim countries nor Muslim people have to submit to the immoral and illegal practises of despotic regimes."

A group of women in Turkey's northeastern province of Rize gathered to protest massacres in Syria and Egypt and said they kept on praying for their sisters and brothers living in those countries. Carrying banners which read 'Hand in hand for Egyptian and Syrian brothers', the women chanted slogans also making Rabaa sign to show their support for pro-Morsi protesters.

In central Anatolian province of Kayseri, citizens gathered and held a funeral prayer in absentia for those killed in Wednesday's chemical attack in Syria.

A chemical attack which hit Ghouta area near Syrian capital early on Wednesday killed over 1,000 people and left many others wounded.