"A coup is coup, there is no democratic coup" Turkish Premier says 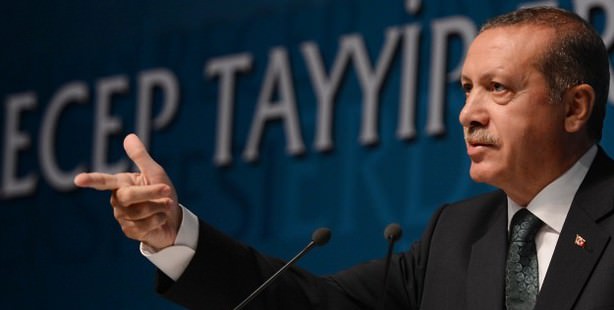 Erdogan noted that supporters of Egyptian military coup are trying to justify it as a democratic action by Egyptian army.

Turkish Prime Minister Recep Tayyip Erdogan said on Sunday that there could not be a democratic coup and that "a coup is a coup", criticizing those who fail to call the military coup in Egypt as a "coup".

Stating on the countries and institutions, which did not call these as 'coup', Erdogan stressed that those who could not call the coup as it is, betrayed not the past, but the future.

"We harshly criticized the coup in Egypt both from a humanitarian perspective and based on our conscience and principles," Erdogan said, adding that coups could not have any legal, fair and reasonable justifications.

Turkish PM Erdogan also noted that the supporters of the military coup in Egypt are trying to justify it as a democratic action by Egyptian army.

"A coup is coup, there could not be a democratic coup," he stressed.

Erdogan also slammed those blaming Mohamed Morsi, the first democratically elected president of Egypt, for making mistakes that led to his ouster, to legitimize the military coup against his regime.

He called such sentences as "Morsi also made mistakes" a "direct support to the military coup".

Mohamed Morsi, Egypt's first democratically elected president, was ousted by the army under an army roadmap on July 3.

Thousands of his supporters have since taken to the streets to demand his return to power.

Erdogan also mentioned the Gezi Park protests of June, underlining that the meaning of freedom must be well understood by all.

"Freedom is what you can do until the boundaries of another person's freedoms, by respecting the public order," he said.

He also added that fight for freedom can only be with ideas not with weapons.