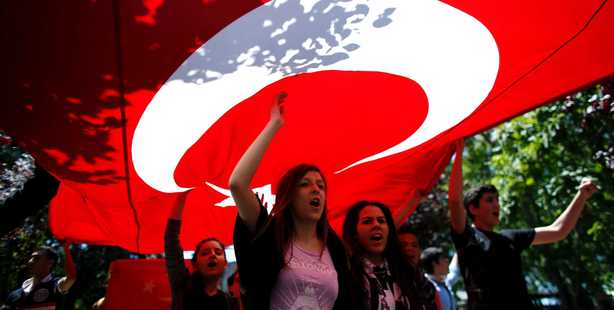 An infamous article of the Turkish Penal Code, which criminalizes insulting the Turkish nation and the bodies of the state, will be amended in the latest reform package.

Article 301 that led to the prosecution of Turkish Nobel laureate Orhan Pamuk in the past, will be redrafted, removing the section that criminalizes insulting of the Turkish state, government, judiciary, military and police. Therefore insulting the Turkish nation still will be a crime.

The controversial article that is widely considered a block for freedom of expression in Turkey, will be one of the items to be included at the latest reform package, SABAH daily reported on Sunday. The current article punishes anyone insulting the Turkish nation, state, government, judiciary, military and police, with those found guilty facing up to two years imprisonment.

The draft of the amendment will be submitted to Parliament, following a few small adjustments by PM Recep Tayyip Erdogan in September.

The same article had been changed by Parliament after creating international controversy in the past. Previous amendment had replaced the term "Turkishness" with "Turkish nation" and added a requirement of permission from the Ministry of Justice for any prosecution regarding the violation.

However, previous changes didn't appear to satisfy the European Court of Human Rights. On October 2011, the court found Turkey guilty in a case concerning Taner Akcam, a Turkish scholar who claims Turkey bears the sole responsibility for the "Armenian Genocide". The court said the law was still a threat against freedom of expression. The court ruled that the amendment didn't protect the freedom of expression enough. Judges said because of the law Akcam continued to live in constant fear of prosecution for his views about the events of 1915.

The proposed amendment is described as progress by some, but others believe it doesn't go far enough to fulfill the demand of the European Court.

Gulcin Avsar, a lawyer mainly working with various Turkish NGO's that focus on human rights and freedom of expression cases, welcomed the "verbal improvement" but criticized the move as "inadequate."

She said, "The article must be revoked completely. It is progress but still contains elements threatening freedom of expression. The government is going step by step but we must see a complete overhaul."