PM Erdoğan: “Assad needs to withdraw to another country” 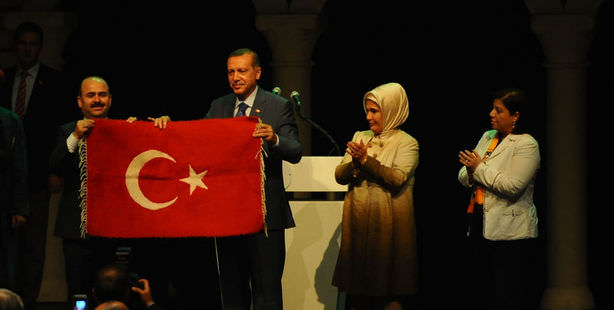 Asserting that a regime, which has murdered over 100,000 civilians, will not be able to remain afloat, Prime Minister Erdoğan stated on Sunday, “The Assad regime now needs to quickly withdraw from leadership and head to a country they can reside in.”

Attending a closing ceremony for Siirt Days held in the Haliç Congress Center on Sunday, Prime Minister Recep Tayyip Erdoğan, who was accompanied by his wife Emine Erdoğan, stated, "As long as an effective step in Syria continues to refrain from being taken, the Syrian regime is practically being given incentives to commit new massacres and create further humanitarian tragedies.

During Prime Minister Erdoğan's address, he focused on what he referred to as an extremely bloody era in Syria and pointed out, "We truly exerted an intense struggle in order to draw attention to the humanitarian tragedy unfolding in Syria."

"THE SITUATION WILL ONLY BECOME MORE GRAVE"

Prime Minister Erdoğan also commented that it was anti-democratic for the U.N. to be sentenced to what the five permanent nations dictate and expressed his support for a youth-initiated campaign referred to as "the world is bigger than five." Erdoğan went on to state, "Over the past month, we have held telephone discussions with the leaders of France, Germany, Greece, Russia, England, Malaysia, Qatar, Italy, Pakistan, Holland, Denmark and Indonesia in addition to the UN Secretary-General, during which we have relayed the gravity of the situation in Syria and have reaffirmed that immediate action needs to be taken. We support and will continue to support any action taken to establish a definitive solution and put a halt to the bloodshed. I would like to especially remind here that temporary measures have never and will never be sufficient in Syria. To strike local targets and to refrain from seeking a conclusive solution will only make the conditions in Syria that much more difficult."

Erdoğan went on to express that the lack of effective action is practically working to promote the Syrian regime to stage further massacres and humanitarian tragedies, and stated, "We have relayed to our counterparts and continue to do so, that the lack of effective steps being taken will only result in further calamity. Asserting that a regime, which has murdered over 100,000 civilians, will not be able to remain afloat, Prime Minister Erdoğan stated on Sunday, "The Assad regime now needs to quickly withdraw from leadership and head to a country they can reside in."