TAF to train the public on measures against chemical attacks 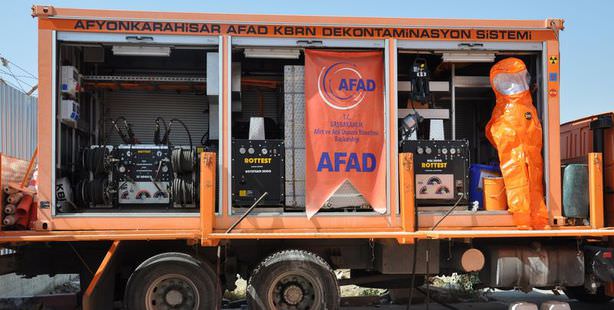 During a two-day inspection of the Syrian frontier with Turkey, Chief of Staff of the Land Forces Command Lieutenant General Uyar requested commanders assigned to regional military units inform citizens of measures against chemical attacks.

With the possibility of an international intervention surfacing to the agenda, following a massacre in Syria widely considered to have been staged with chemical weapons, Turkish Armed Forces (TAF) Land Forces Command Lieutenant General İhsan Uyar was joined by a delegation of high-level military officials on a two-day inspection of Turkey's border, during which he relayed orders to regional unit commanders to begin efforts to ensure the public is informed in regards to chemical attacks. The delegation also assessed preventative measures against a migration wave as a possible ramification of a potential military intervention in Syria.

Yesterday, Lieutenant General Uyar inspected the chemical biological radiation and nuclear detection vehicle (KBRN), which was brought in from Afyonkarahisar to the Öncüpınar Border Gate in Kilis, and later checked up on the missile batteries and air defense system previously set up in Bayraktepe, also located within the Öncüpınar Border Division Command. After receiving a two-hour briefing by Troop Commander Infantry Ranking Squadron Leader Hüseyin Geçgel, Lieutenant General Uyar departed Kilis by helicopter. Uyar and his accompanying delegation conducted air surveillance along Turkey's frontier with Syria spanning from Hatay to Kilis and inspected border posts and critical points along the border in Gaziantep, Şanlıurfa and Mardin.

TENT SET UP AS MEASURE AGAINST CHEMICAL ATTACK RISK

In addition to the chemical biological radiation and nuclear detection vehicle (KBRN) operated by Van AFAD which is set up at the border, a chemical cleansing tent has been set up at the Akçakale as a measure against the risk of chemical attacks. The tent is being used to check whether those injured coming in from Syria have been subjected to chemical warfare, after which the injured parties are being transferred to hospitals.