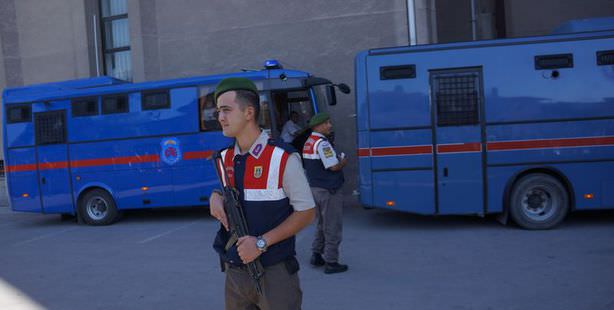 The first hearing in a historical trial on the February 28, 1997 “postmodern coup” had a tense start on Monday. Citing a key piece of evidence as containing “state secrets”, the National Security Council refrained from submitting the records of the infamous military meeting during which a memorandum was issued that later led to the demise of the Erbakan-led government.

The first hearing of the February 28, 1997 "post-modern coup", in which 103 suspects are being tried for "overthrowing the government of the Turkish Republic by force or participating in the overthrow," began yesterday. High security measures were in place as the suspects arrived to the Ankara High Criminal Court after specially trained bomb detecting dogs conducted a thorough search. The first hearing of the case, which involves 103 suspects, 37 of which have been detained and 481 complainants, commenced with all suspects under arrest in attendance. Six suspects that were released pending trial were excused from attending yesterday's hearing, including the number one suspect in the case, retired former Chief of Staff İsmail Hakkı Karadayı.

Ankara Public Prosecutor Mustafa Bilgili had requested documents in connection to the February 28, 1997 meeting; however, the National Security Council General Secretariat refrained from sending the records from the meeting, citing the documents as containing "state secrets". A copy of a written notice requesting the resignation of the 54th government did however appear to have made it to court.

The hearing yesterday began with the identification of the suspects after which defense attorneys argued the case was undue by citing a previous ruling of a lack of legal grounds in a case tried in Istanbul in regards to the February 28 coup as well as claiming that Public Prosecutor Mustafa Bilgili initiated the investigation without having received court authorization. Debate ensued between defense prosecutors and the court board who wanted to rule on the demands after the reading of the indictment.

The board noted that a response to written correspondence to the Istanbul Anti-Terror Law Deputy Chief Public Prosecutor who dismissed the previous criminal complaint, which states the investigation could continue, has been recorded in the proceedings.

Former Chief of Staff İsmail Hakkı Karadayı's attorney Erol Aras argued that the case should be tried in the Constitutional Court. One of the suspects Çetin Doğan stood up at one point stating, "All of the documents used as evidence are photocopies. The Supreme Court Assembly of Criminal Chambers ruled in 2010 that if the document is not an original copy or has not been approved by an authorized individual then that document is inadmissible."

The trial resumed on Tuesday.