Any intervention must unseat Assad 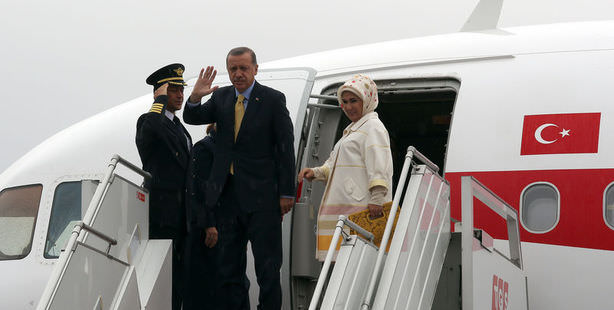 Prime Minister Erdoğan sets out for the G-20 summit on Wednesday, where he will have the opportunity to meet with U.S., Russian, French and German leaders and to lay down the evidence compiled on the use of chemical weapons in order to assert that “if Assad does not go, there will only be more bloodshed.”

Prime Minister Tayyip Erdoğan heads for St. Petersburg, Russia tomorrow to attend a G-20 Leaders Summit. It seems however, that Syria will be making its mark on the summit, which is intended to focus on world economy. Prime Minister Erdoğan will be holding a number of bipartite meetings on Syria on the sidelines of the summit. According to information obtained, Prime Minister Erdoğan will be meeting with U.S. President Barack Obama, Russian President Vladimir Putin, French President Francois Hollande and German Chancellor Angela Merkel to which he will be sharing findings by Turkey's National Intelligence Organization (MİT), which point to the use of chemical weapons in Syria. MİT acted more hastily than the United Nations in Syria and has already verified that chemical weapons were used through testing on acquired samples. In addition, MİT has also obtained detailed technical information on which missiles were loaded with chemical weapons and when and where those missiles were fired.

Prime Minister Erdoğan departs for Russia on Wednesday. On Thursday, Erdoğan will attend the G-20 summit while also devoting a significant amount of time to attend bipartite meetings with other state leaders. According to the information obtained, Erdoğan will reiterate that Turkey maintains its original stance in regards to intervention on Syria and will also state that the world remaining silent, and especially the UN, has only resulted in increasing the death toll. Erdoğan will express his criticism of the UN structure, a critique he has addressed often and will also emphasize that the "right to veto" in the UN Security Council has especially resulted in the inability to put a halt to the crimes of humanity unfolding in Syria.

Prime Minister Erdoğan will also be sharing intelligence collected by Turkey and will emphasize his stance that "if Assad does not go, there will only be more bloodshed."

Prime Minister Erdoğan will also be leading Istanbul's delegation to the International Olympic Committee (IOC) as it bids to land the 2020 summer Olympics. On Saturday, Erdoğan will attend the IOC vote on the location of the world's biggest and most expensive multi-sport event at its session in Buenos Aires, Argentina.