'As long as the mindset remains the same, democracy will suffer’ 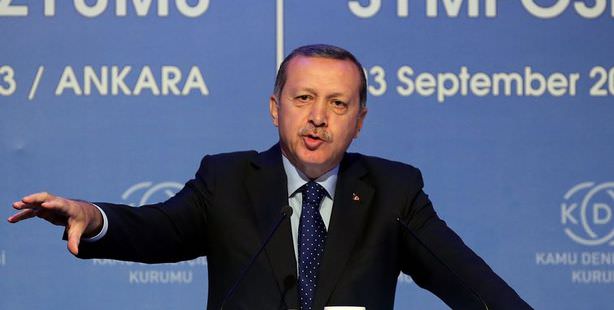 Prime Minister Erdoğan stated on Tuesday that no matter what steps are taken, if there is not a reform in mindset, democracy will remain lacking and added, “It may take time, but sooner or later there will be a change in the mentality.”

Prime Minister Tayyip Erdoğan delivered an address for an International Ombudsman Symposium, which included European members, on Tuesday during which he delivered a series of messages on democracy, Turkey's ombudsman institution and Syria.

"Democracy does not consist solely from establishing institutions and reinstating rights. A reform of the mindset and adopting, assimilating and accepting democracy allows it to function in the ideal manner. We can reshape the state to be the servants of the nation. You can ensure the judiciary is independent by keeping it away from all pressure and guidance. You can ensure freedoms, basic rights, the constitution and laws. However, if there is no change in mentality or a reform of the mindset, then whatever progress has been made will only be on paper and will remain behind in practical theory."

Erdoğan went on to state, "The state may be transparent, law-abiding, fair and impartial, and may secure the most modern and advanced rights for its citizens on paper. However, if the mindset of the bureaucracy, which allows the state to function, has not changed and continues to hold onto dilapidated traditions, then as society becomes democratized, the function of democracy will always remain lacking."

The Prime Minister added, "We know that it will take time for the mindset to change, however we believe that this transformation will take place sooner or later. It is based on this understanding that we continue our reforms without losing speed or slowing down."

Prime Minister Erdoğan acknowledged that such a change in mindset is difficult to come by, however he said, "We will succeed." Erdoğan said that both the establishment of the Ombudsman Institution as well as the judiciary reforms are results of this transformation in mindset.

Erdoğan also touched on criticism of the ruling AK Party's environmentalism by stating, "I can confidently say that we are competitive with EU member nations when it comes to planting trees, and in fact we are ahead. When it comes to this issue we are not a wagon, we are a locomotive. We have planted millions of trees since we came to power and we continue to do so with haste."

Expressing that he personally is a great fan of nature, Erdoğan said that he loves this type of work and therefore to be referred to as an "environmental enemy is a great injustice.

THE WEST NEEDS TO RECOGNIZE THIS COUP

Prime Minister Erdoğan reminded that hundreds of thousands have died in Syria and asked, "Where is the West? The EU has yet to call the coup in Egypt a 'coup'. They should provide us with their definition of a coup."