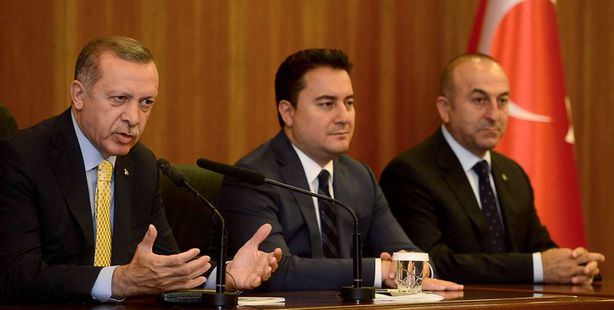 In response to Assad’s statement that an intervention on Syria would escalate into a regional war, Prime Minister Erdoğan assured that Turkey is ready and said, “Is Syria ready for this I don’t know. I have no idea what Assad is relying on.”

Prime Minister Tayyip Erdoğan told reporters at Ankara's Esenboğa Airport upon his departure for Russia on Wednesday to attend the G-20 Leaders Summit, that Turkey is ready to join a "coalition of the willing" in the case of probable military action against Syria.

What is Bashar relying on?

When asked to comment on Syria's recent threat of intervention escalating into a regional war and if Turkey was ready for such a possibility, Prime Minister Erdoğan stated, "Of course our country is ready for such a probability at any time. How ready Syria itself is for this, I do not know. Our military authorities are well informed on this issue as are we more or less from the information we have received from them. What Bashar is relying on or basing his statements on I have no idea."

CHEMICAL WEAPONS USE IS EVIDENT: Erdoğan said it was obvious chemical weapons have been used in Syria. "The whole world has seen the images of children massacred and martyred. You can clearly see that they were killed by chemical weapons. The regime also accepts this. They are trying to stage a tactic of evasion by stating 'We didn't do it, it was the opposition."

PUTIN'S APPROACH IS INTERESTING: Erdoğan also commented on Russian President Vladimir Putin's recent statement that Moscow would "be ready to act in the most decisive and serious way" if there was clear proof of what weapons had been used and who had used them. "It is quite interesting that Mr. Putin who said, 'We are against military intervention" to now be approaching the issue by stating, 'We are in favor or will take place in an intervention in the case that chemical weapons were used.' In our opinion, whatever weapon you use in an attack that results in death is a crime. It is a crime of humanity. So when you bomb with planes and helicopters, shoot with snipers and use tanks it is not considered a crime, but when you use chemical weapons it is. More than 100,000 people have been killed and you do not speak out against it. However, when 1,300 people die or 130 then you say 'it is a crime because chemical weapons were used.' You say, 'If this is verified to us, then we will support the UN.' To be honest, I have a hard time understanding this."

OBAMA AND CAMERON'S STANCE: Erdoğan also commented on Obama's decision to seek congressional approval for military action in Syria by referring to the move as "either an internal political decision or one based on Obama's self-confidence. However, it appears that as Obama chose to make this move, in the same manner Cameron has placed high importance on the congress. With the steps taken, they are both of course attempting to use their own initiatives and the original decision was not conclusive, therefore from here on out there is debate that they may take these steps." Remarking that French president Hollande has announced that they are ready for an intervention; Prime Minister Erdoğan stated that the G-20 summit will be extremely important in terms of being able to discuss these issues.

MEETING WITH OBAMA AND PUTIN: Erdoğan mentioned that he has heard that U.S. President Obama will only be attending the opening of the G-20 summit after which he will depart and said, "We will have the opportunity to meet even if it is just for a short while. As the host, Putin will also be meeting with all of the nations there. Therefore, we will be meeting with Mr. Putin. If the summit was being held in a different country, we would have had a chance to meet for longer."

BASHAR MUST LEAVE SYRIA: Erdoğan also reiterated his sentiment that Bashar Assad leave Syria by stating, "I hope that he will not tyrannize the Syrian public any longer and will immediately leave Syria, a country which he has been unable to secure peace or security in."

During the summit, Erdoğan will have the opportunity to meet separately with a number of participating leaders. According to the information obtained, Erdoğan will be holding a short meeting with President Obama, who is scheduled to depart Russia following the summit opening. Meanwhile, information has also surfaced that members of Erdoğan's staff have requested a meeting with Chinese President Xi Jinping, who has displayed an adamant stance against intervention in Syria. The objective in this regard is to soften China's harsh stance on the Syria issue.

Prime Minister Erdoğan and his accompanying delegation flew into the Petersburg Pulkova Airport on Wednesday to attend the G-20 summit, which started on Thursday. After arriving to the city center and taking a short rest in the hotel where he will stay during his series of meetings in Russia, Erdoğan was joined by wife Emine Erdoğan, daughter Sümeyye Erdoğan and Deputy Prime Minister Ali Babacan for a boat tour of the historical city's canals on Neva River, where they also enjoyed dinner.