Erdoğan and Hollande in full consensus on Syria 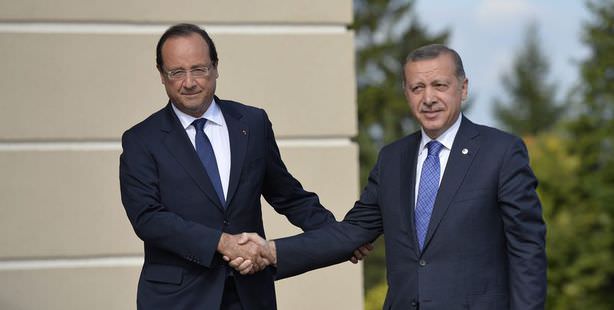 Prime Minister Tayyip Erdoğan and French President Francois Hollande met yesterday before the G-20 summit talks on global economy in a villa allocated to the French delegation in St. Petersburg's Strelna Palatial district. During the meeting, which focused on bilateral relations and the crisis in Syria, both state leaders concurred that the Syrian administration's use of chemical weapons against their own public must be retaliated. Erdoğan highlighted the importance of the international community fulfilling their obligations when it comes to the situation in Syria and taking the necessary steps as soon as possible. Hollande emphasized the great importance France places on upholding bilateral relations with Turkey and expressed his intentions to pay a visit to Turkey as soon as possible.

Erdoğan and Hollande supposedly shared intelligence information and emphasized the necessity for a step to be taken, especially by the UN, in order to put a halt to the bloodshed in Syria. During the meeting, both leaders are said to have reached a consensus on the necessity of the world not remaining spectators to the crimes of humanity being committed in Syria. Both nations' priorities lay with the UN verifying that chemical weapons were used in Syria and taking the necessary step accordingly. It has been reported that both leaders also see eye to eye in regards to the formation of a potential "Coalition of the Willing" should all hope be lost with the UN.

A REINFORCEMENT OF TRUST

Turkey's second nuclear plant project signed with Japan was also brought up during the meeting. Erdoğan pointed out that it involves a reactor developed by Japan's Mitsubishi in conjunction with the French firm Areva. Hollande expressed his gratitude to Erdoğan for the haring of this technology.