PM Erdoğan: Coalition of willing may decide on Syrian operation 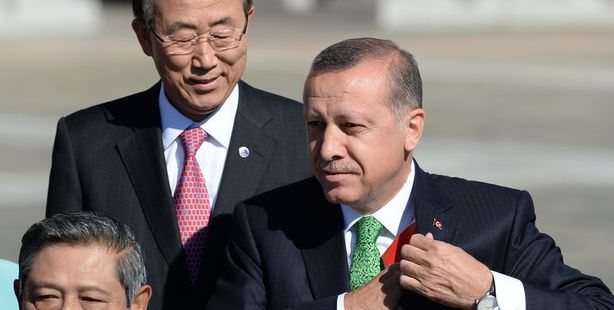 Speaking from the G-20 summit in St. Petersburg, Prime Minister Erdoğan said that with the absence of a UN ruling on Syria, an international joint operation cannot be conducted, however he said, a coalition of willing states may decide to go ahead.

Prime Minister Recep Tayyip Erdoğan took part in a press conference on the final day of the G-20 Leaders Summit held in St. Petersburg, Russia prior to his departure for Argentina to attend the final presentation and voting for Istanbul's 2020 Olympics bid. On Friday, Prime Minister Erdoğan also had the opportunity to meet with U.S. President Barack Obama.

Referring to the general issues handled at the G20 Summit, Erdoğan acknowledged that the leaders at the G-20 summit had the opportunity to discuss the use of chemical weapons in Syria. Pointing out that due to the fact that a UN resolution on intervention has yet to fruition, Erdoğan said that an international joint operation was not possible, however, a coalition of willing states may decide to take measures.

"At the moment there is no such thing as a decision for a joint operation in Syria ... as there is no U.N. Security Council decision," he told the news conference in St. Petersburg. However, he said a small group of countries could form a coalition. "It could be three countries, it could be five countries. What will be the strategy of such an operation and what will be the tactics… these are separate issues. But the necessity for such a thing to happen was emphasized (at the summit)," he said.

Prime Minister Erdoğan said on Friday that almost all leaders at the G20 summit accepted the need for intervention in Syria and repeated that a small coalition could be formed for a joint operation even outside the auspices of the U.N. "Almost all of the leaders who attended the summit are closely following the massacre the Syrian regime carried out on its people and the leaders have expressed that an operation is extremely necessary against Damascus," Erdoğan said.

Touching upon opposition to Turkey's efforts and potential role in an operation on Syria, Erdoğan said, "We are not obsessed with war. A fire has started in our neighborhood. We are the first place to be hit by it. We need to extinguish this fire. The biggest threat awaiting Syria is a war of sects."

Turkey has said previously it would be ready to take part in international action against Syrian President Bashar al-Assad, and has put its armed forces on alert to guard against threats from Syria, with which it shares a 900 km (560 mile) border.