"Those who remain spectators will have to answer to history" 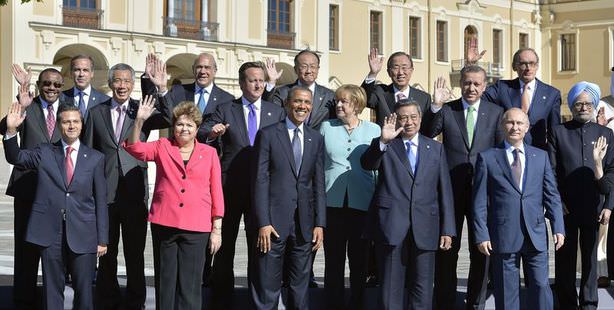 Addressing reporters at the close of the G-20 summit, Prime Minister Erdoğan stated; “A fire has started in our neighborhood and we will be the first place to be hit. Attempting to extinguish this fire is not warmongering. Those who remain spectators to the deaths of 100,000 people will bear a responsibility in history.”

Prime Minister Recep Tayyip Erdoğan offered up his assessment of the G-20 summit for reporters at a press conference prior to his departure from Russia for Argentina to lead Istanbul's 2020 Olympic bid delegation for today's final presentation and vote.

Highlighting that all leaders attending the G-20 summit were in agreement that chemical weapons were used in Syria, Erdoğan said, "these leaders have also expressed the necessity for an operation. However, they maintain the position that it would be best to act according to the UN report. Those who raise hell when a few seals die are now remaining silent to the deaths of 100,000 people."

The following are a series of messages delivered by Prime Minister Erdoğan prior to his departure for Buenos Aires:

TIMING DEPENDENT ON UN REPORT: "Almost all of the leaders who attended the summit are closely following the massacre the Syrian regime carried out on its people and the leaders have expressed that an operation is extremely necessary against Damascus," Erdoğan said. Mentioning that Russia is hesitant regarding documents proving that chemical weapons were used and that the Assad regime staged the attack, Erdoğan said, "Everyone agrees that chemical weapons were used in Syria but the disagreement is on who used them, and UN reports are important in this context."

CHEMICAL WEAPONS CONSTITUTE A CRIME AS DO OTHER WEAPONS: Prime Minister Erdoğan addressed the fact that hundreds of thousands of people are being killed, however the international community is focusing in on the use of chemical weapons, which he qualified as a misguided objective. "Chemical weapons constitute a crime and are cited as such in international law. Is it not a crime to kill people by bombing? Is it not a crime to force seven million citizens to be displaced," asked the prime minister, adding that each have their place in legislation.

THE TRUTH IS EVIDENT: "The truth is evident and those who ignore it will have to answer to history. I want to express that they, also will be guilty of committing a crime against humanity. Political leaders bear the responsibility of establishing our joint position. Those who raise hell when one or two seals are killed are now remaining silent to the deaths of 100,000," said Erdoğan adding that this is not befitting of political leaders. "We have always supported and will support any initiative that will ensure Syria has an administration that will embrace a constitutional and parliamentary system," Erdoğan told reporters.

AFTER ASSAD: The Prime Minister responded to the question of what will happen if Assad leaves by asking, "What could be more oppressive than a leader who uses chemical weapons and bombs against their own citizens?" Erdoğan said that any administration elected by its public could not be worse than the current regime. "I believe this because of my own experience in politics," said Erdoğan.

OUR NEIGHBOR'S FIRE: Erdoğan commented on criticism by certain circles and especially the opposition on their support for an operation in Syria by stating that, this absolutely does not mean that they are "warmongering" or "war-minded" as it is being purported. We have a neighborly and humane responsibility for these people. A fire has started in our neighborhood and we will be the first place to be struck by it. This fire needs to be extinguished."

NO DECISION REACHED ON INTERNATIONAL JOINT OPERATION: Erdoğan reiterated his willingness to join a coalition of like-minded nations to deal with the crisis in Syria, by stating, "At the moment there is no such thing as a decision for a joint operation in Syria ... as there is no U.N. Security Council decision. However, a small group of countries could form a coalition and stage a joint operation." Russia is hung up on two issues, one the use of chemical weapons and two, who used them, said Erdoğan adding, "They cannot accept that this attack was staged by Assad. Maybe this is what they are saying because they are thinking about the future."

THE TRUE THREAT IS A SECTARIAN WAR: "Al Nusra is not working in conjunction with the Free Syrian Army which does have a significant position in the Syrian National Coalition. As far as I know, the Syrian public does not give much credence to extremists. Al Qaeda is currently isolated in Iraq however, the situation there has transformed into a sectarian war. The biggest threat awaiting Syria is actually for this to turn into a war of sects," said Erdoğan.

THE EXPECTATION IS AIR SUPPORT: The Prime Minister also commented on UN Secretary General Ban Ki-moon's statement against military intervention by stating, "That may be his personal opinion. At present, there is actually no need for ground intervention in Syria. What the opposition forces are hoping to receive is air support. Once this support is provided, the forces there are already at a stage which would allow them to be quickly successful."

UN REPORTS ARE IMPORTANT FOR PUTIN: Prime Minister Erdoğan also mentioned that Obama and Putin concur that chemical weapons were used in Syria; however, the latter believes it was the work of the opposition. "The mission reports sent by the UN will be important at this point. Once these reports come in, the evaluation process could establish very different grounds," said Erdoğan.