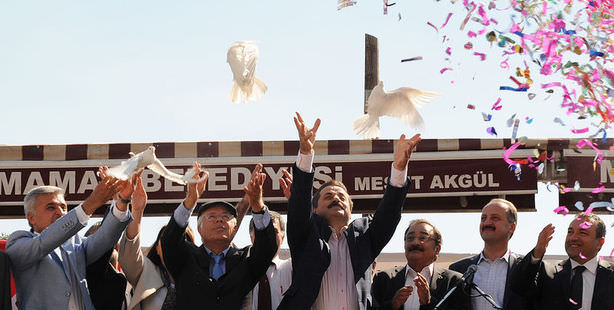 Pressing the button for the official start of the construction of a joint mosque and cemevi complex in the capital, Labor Minister Çelik assured, “Mosques and cemevi’s (Alevi places of worship) are not rivals; and they are brothers.”

Referred to as the "Most significant project in 900 years" yesterday marked the groundbreaking ceremony of a joint Mosque and Cemevi Complex project in Ankara's Mamak district. Minister of Labor and Social Security Faruk Çelik was on hand and joined by honorary CEM Foundation Chairman İzzettin Doğan as well as other representatives from the Alevi community for the momentous event held on Sunday and celebrated with the release of doves as a symbolism for peace.

Speaking at the ceremony, Labor Minister Faruk Çelik stated that mosques and cemevis (Alevi places of worship) in no way rival one another but are instead 'sister-establishments'. The Mosque-Cemevi Cultura Center will include a mosque, a cemevi and a soup kitchen and will be constructed in a 12,000-square-meter area, which includes a 5,000-square-meter park in the Mamak district of Ankara. The project is expected to be completed in a year.

Speaking at the groundbreaking ceremony, CEM Foundation Chairman Doğan proposed that Alevi laws be safeguarded through legislation and that a share be allocated to the Alevi community from the national budget. Doğan also called for all cemevi's to acquire legal status. Labor Minister Çelik expressed that this was a historic day in the name of brotherhood and tolerance and emphasized that politics is not the way to solve these issues which are affairs of the heart. "Mosques and cemevis are not rivals to one another, they are sister-establishments. There is no adversity, we are kins," said Çelik.

Sunday's groundbreaking ceremony for the Mosque-Cemevi Project in the capital began with tension, as a group attempting to set up a barricade had to be dispersed by police officers who used riot control vehicles to spray water cannon and tear gas on the demonstrators. A number of police officers and protesters were wounded while main opposition party CHP Ankara Deputy Aylin Nazlıaka and Tunceli Deputy Hüseyin Aygün came out to show their solidarity with the group of protesters.