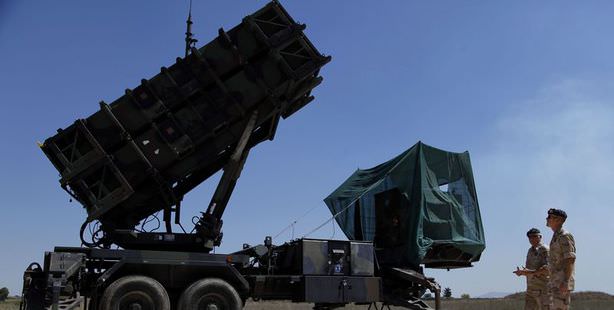 Turkey is ready for any imminent threat from Syria. Patriot battery systems are in place to combat potential missiles from Syria, while Turkey’s F-16’s are ready to respond in the case of an air strike. Should Turkey have to make a move, the first target will be the Syrian air defense system set up in Latakia, which was responsible for downing the Turkish F-4 reconnaissance jet in June of last year.

While Prime Minister Tayyip Erdoğan has freshly delivered the message that Turkey is "ready for any scenario" involving military action in Syria, SABAH has acquired the details of what exactly is at stake. Turkey has laid out on the table all potential means of retaliation by Syria in response to international military action on the crisis-torn country and has reached the verdict, "there is no cause for concern." Security meetings held in Ankara are honing in on three potential ways Turkey may be in threat.

THREE FORMS OF RISK ALONG THE BORDER

The first potential risk is of Syria staging any form of chemical attack on Turkey using missiles, in which case it is asserted that the Patriot anti-missile battery systems would be able to render the missiles ineffective before they had a chance to reach the border.

Turkish F-16s are on stand-by to immediately counteract any form of air strike from Syria that supersedes the border. The threat of Assad attacking Turkey with land-based missiles appears to be a low probability due to the lack of a regime-supporting populated region close enough to Turkey's borders.

The Patriot anti-missile battery systems, that were brought in from the USA, Germany and Holland and positioned along Turkey's border with Syria, are currently waiting on alert against any possible threat of a chemical attack. In addition, the Patriot battery systems will offer an effective defense against mid and long-range ballistic missiles and missiles launched from vessels.

Any missile launched is initially detected by the Patriot radar system, which determines its particular characteristics. The system is able to prepare for firing in nine seconds. The system computer determines which missile on which battery will have a more effective result and selects accordingly before firing. Patriots can be used to combat both planes as well as ballistic missiles.

In addition to the Patriot battery systems, Turkish F-16 jets are also ready and waiting to defend against an air strike. Should Syrian warplanes approach the border, F-16's will then go into effect. In any threat detected, F-16's will embark on a defense plan to render any form of chemical attack or otherwise ineffective.

Another possibility being laid to the table, although considered the least likely, is the potential for attacks to be staged from bastions along the Syrian border. However, Assad does not currently maintain a bastion in any region near Turkey's border.

While measures are being taken against any potential threat coming in, Turkey's primary target in the case of an attack has also been established. Regardless of what form of attack is staged in Syria, Turkey will aim to strike Syrian air defense systems in Latakia, which were responsible for downing a Turkish F-4 jet. According to information obtained, Turkey has acquired the knowledge, whether from its own intelligence-gathering or sharing, that a major portion of Assad's main defense and missile systems are said to be positioned in Latakia. The batteries used in the attack on Turkey are also cited to be located in Latakia and are amongst the first points to be hit in a possible intervention on Syria.

Repair and maintenance work is now under way on a siren system to announce emergency situations set up in the Turkish town of Reyhanlı which is situated along the border with Syria. Turkey's Disaster and Emergency Management Presidency (AFAD) has sent orders to the Reyhanlı Municipality for the repair and maintenance of the siren system, which will inform citizens of any distressful situation. Specialist teams have already begun working on ensuring the effective communication system is up and running and ready to be on alert.

Turkish soldiers are receiving reinforcements of Chemical, Biological, Radiological, and Nuclear Defense (CBRN) protective clothing as a measure against a potential chemical threat. By the end of the year, a total 161,102 protective uniforms will be distributed amongst Turkish soldiers. The chemical stockpile in Syria, which is still in the throes of civil war, constitutes a threat for Turkey. According to U.S. Department of State data, Syria has the world's fourth largest chemical arms stockpile. A significant portion of that stockpile is being held near Aleppo.