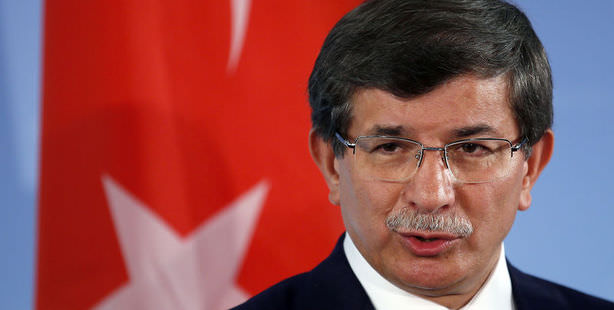 Foreign Minister Davutoğlu commented on the proposal for Syria’s chemical weapons stockpile to be transferred to an international safeguard, by stating that such a formula, which grants the regime time to complete an inventory, would only be inviting further massacres to be staged in Syria.

In an interview broadcasted on the private television station Habertürk, Foreign Minister Ahmet Davutoğlu reiterated Turkey's unwavering stance that the regime in Syria used chemical weapons against its own public. "Assad and his team have known no bounds when it comes to staging massacres on its own people. They have even resorted to using chemical weapons," said Davutoğlu who went on to comment that the Russian proposal to place Syria's chemical weapons under international control could result in encouraging the Syrian regime if the chemical attack staged last month continues to go unpunished.

Embarking on this "cosmetic method" of having Syria surrender its chemical weapons, in the name of ignoring the grave crimes already committed, will allow the regime to gain time as it will take months to not only conduct an inventory but also to transfer the weapons, Davutoğlu stated, emphasizing that granting this time would only be lighting a green light for Assad to stage further massacres in the future.

Foreign Minister Davutoğlu also reminded, "Even before the use of chemical weapons, the death toll in Syria was already over 120,000 or 200,000.

"Turkey is taking measures against every type of security risk"

Foreign Minister Davutoğlu also stressed that Turkey is taking measures against every type of security risk and added, "Any attack against us will receive a response." He said they, as Turkey, have not called for or encouraged anyone to stage a war, adding that they have always made a humanitarian call, which they will maintain. "It was the Assad regime who declared war," Davutoğlu noted and said the international system has failed the test on Syria. Davutoğlu underlined that simply being situated near the regime in Syria posed a risk itself and said, "Had the international community displayed a similar determination two years ago, we would not have seen the use of chemical weapons in Syria."
Davutoğlu also commented on Assad's warning that anything could be expected by the Syrian regime if subjected to a military strike, and said the statement implies he has control over terrorist groups.

"UN report must be published as soon as possible"

Reminding that the UN investigation committee can only determine whether or not chemical weapons were used and not who used them, Davutoğlu stressed "the UN report on the August 21st chemical attack in Syria must be published as soon as possible."

"The chemical attack was made by missiles which are only in the hands of Syrian regime. The Syrian regime kept a part of Damascus closed for three days after the chemical attack in order to erase all traces of chemical weapons," Davutoğlu said. Noting that there were 200,000 missing people in Syria due to the civil war, Davutoğlu said, "The Syrian regime must be punished as clearly as possible," and added, "Russia and China should bring forward another proposal if they block the United Nations (on Syria)."